When I did the Summer of Hercules, last year, I also reviewed some graphic novels. Comics dealing with Perseus are difficult to find, but I did manage to track down two of them that are retellings of the original myth, though it is clear that they were influenced by movies like the original Clash of the Titans, among other things.

Perseus: The Hunt for Medusa’s Head 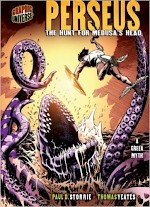 The first is Perseus: The Hunt for Medusa’s Head, published in 2008 by Lerner Books. It was written by Paul D. Storrie and illustrated by Thomas Yeats. At 48 pages, this is a very lean comic book, but nevertheless does a good job of summarizing the story of Perseus.

The plot follows the original myth almost to the letter. It starts off with Perseus wandering the beach and then being visited by the goddess Athena. Perseus has promised Polydectes the head of Medusa and she gives him the equipment he needs to defeat her. After this, Perseus’ backstory is told and includes everything we would expect: Danaë being locked away by Acrisius, impregnated by Zeus, cast into the sea, and so forth.

The rest of the plot follows the familiar path: Perseus tricks the Graeae to reveal the location of the island of the gorgons, he sneaks up on Medusa as she lays sleeping, beheads her, then encounters Andromeda before flying back to Seriphos, defeating Polydectes, and then accidentally killing his grandfather Acrisius in Larissa. There are few surprises along the way, but there are few points worth mentioning.

First is that the story deviates from established mythology by having Pegasus born not from Medusa’s neck, but from blood that had been spilled on the ground.  A second point is that the sea-monster, which resembles a giant reptilian octopus, is called a ‘kraken’ in an obvious homage – I guess – to the original Clash of the Titans.

But thirdly and most interestingly, the writer decided that Andromeda’s city was indeed located in Ethiopia and the artist represents her with a dark skin colour. The writer even included a plot thread where Andromeda was originally betrothed to another man, but Perseus defeats him and his allies by showing them Medusa’s head and petrifying them.

The book includes a brief dramatis personae (referred to as a glossary) and a list of suggested reading and movies. The writing is good and the artwork is great, almost traditional. Much of the equipment and buildings shown in the book are drawn more from contemporary fantasy than from actual ancient Greek artefacts and structures, but the overall plot stays true to the original myth and I recommend you pick this up, especially for younger readers. 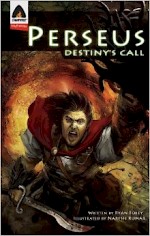 The second comic book was published in 2011 by Campfire in New Delhi and seems to capitalize on the release of the remake of Clash of the Titans. The book was written by Ryan Foley and illustrated by Naresh Kumar. It’s about 90 pages long and has a foldout poster of the head of Medusa.

The art is good, often downright beautiful, but the opening few pages were distracting to me: the characters that feature here are clearly drawn after Colin Farrell and Angelina Jolie, from Oliver Stone’s Alexander (2004). Annoyingly, the top-right panel of page 7 was re-used, as a full-page panel, on the final page of the actual story (p. 84), which makes the book come across as cheap. Since these panels seem to be drawn directly after stills from the movie, it makes me wonder if other parts of the artwork were likewise ‘borrowed’ from other sources. 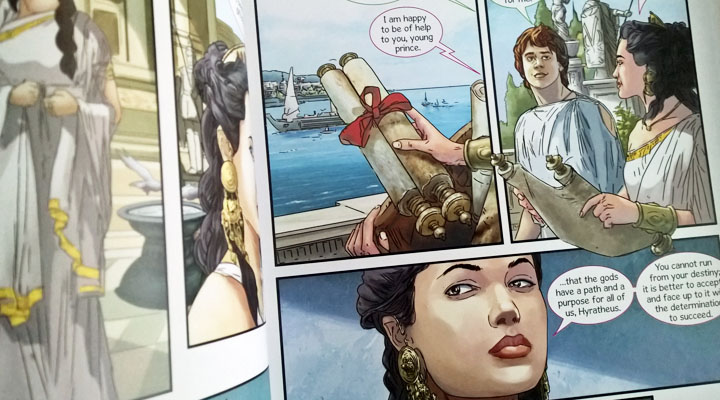 The story follows the original myth again quite closely, with some minor differences. Medusa, for example, is shown to have been a sea-nymph prior to her transformation into a monster. There are also a few parts obviously inspired by Clash of the Titans: Medusa dwells alone in what looks like an abandoned temple complex and the sea-monster resembles a reptile-like creature, even though they do refer to it as ‘Ceto’ rather than as a kraken.

All in all, this is a good book, but I simply found the inclusion of clear portraits of Colin Farrell and Angelina Jolie quite jarring. They are also wholly superfluous: these two characters (‘Hyratheus’ for Farrell and ‘Lady Demiarties’ for Jolie) serve to frame the story of Perseus, but I don’t think this framing device was needed at all.