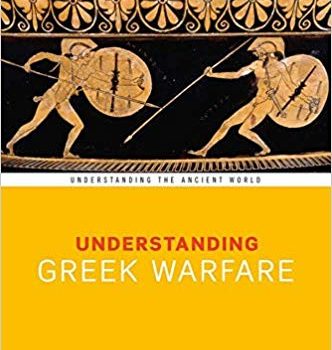 If I were Routledge's commissioning editor, I'm not sure I'd have thought this was a good idea. To survey the history of Greek warfare from Homer to the end of the Hellenistic era in just over 200 pages of text is ambitious, and I might have turned down such a pitch. Fortunately, I don't work at Routledge, for Matthew Sears has done an admirable job.

Understanding Greek Warfare is an attempt to provide an overview of the main features of warfare in the Greek world pitched at an undergrad level. In seven chapters Sears lays out the main debates (e.g. Homeric dense versus loose phalanx, the othismos, or the nature of Alexander's grand plan) with the main arguments for each side in the debate. Sears generally indicates the status quo of these debates, without coming down on one side, as that would require much more argumentation than he has space for. The main proponents in the debates are named and each chapter comes with a succinct (two-dozen titles or so) list of relevant further reading with a line or two stating the main thrust of each publication. This feature alone makes the book an excellent starting point for further study and specialisation.

Sears writes lucidly and in an engaging way as well, so what's not to like? Inevitably of course, in an overview this succinct, the specialist is going to feel a bit left out. Sears can only touch upon the salient points, after all. The topic of naval warfare in the Hellenistic era, for instance, is almost completely lacking, though there IS a dedicated chapter for the 5th and 4th centuries BC. In general though, I think the emphasis is well selected. It's a shame that there was clearly no budget for battle maps, only Gaugamela and Cannae (Sears considers Hannibal a general in the Hellenistic mould and the coming of Rome is of course relevant) are included, likely because they were easily available in the Public Domain. One or two times, I wondered whether Sears was too wedded to the standard narrative. One example is Gaugamela. Sears mentions that the Astronomical Diaries provide evidence for Darius' soldiers deserting him in the sources introduction to the Philip and Alexander chapter. 25 pages later, when he looks at Gaugamela in detail - each chapter comes with a few detail studies to illuminate that chapter's main points - the morale of the Persian soldiers isn't mentioned anywhere and we're back to the knife-edge battle as presented by our usual sources.

Understanding Greek Warfare is highly recommended if warfare in Ancient Greece is still somewhat new to you, or if you'd like to freshen up your knowledge of the overall context or the current academic 'state of play'.