Over the course of the next few months, a number of conferences are organized that should be of interest to readers of Ancient Warfare. If you happen to have the opportunity, I would encourage you to attend. And if you’re going to Wales (the second conference mentioned below), I’d love to meet with you in person.

First of all, we have a conference about recent movies in which Greco-Roman mythology takes centre stage, with the title The New Heroes on Screen. This conference is organized by Antony Augoustakis (Illinois) and Stacie Raucci (Union College) and takes place at the European Cultural Centre of Delphi from 29 June to 1 July.

For three whole days, various authorities will regale you with papers about Greek and Roman heroes on screen, including Jon Solomon (Illinois), author of The Ancient World in the Cinema (2001). Two papers in particular caught my eye: Kirtsen Day’s paper on Aeneas and Dan Curley’s closing lecture on Joseph Campbell’s monomyth. 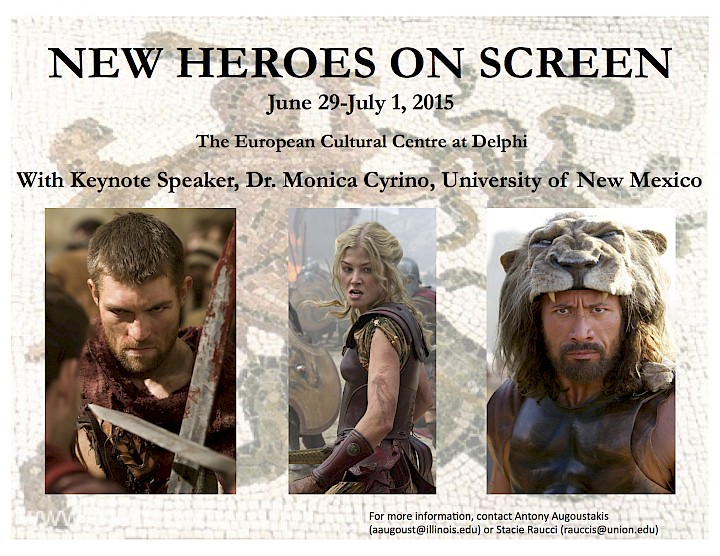 Aeneas is an interesting hero to focus on: a supporting character in the Greek versions of the Trojan War, he was propelled to stardom by the Roman poet Virgil and eventually became a powerful figure in Italian cinema. Joseph Campbell’s idea of the monomyth, espoused in his book The Hero with a Thousand Faces, has had a profound impact on modern moviemakers (such as, famously, George Lucas), even if the monomyth itself is a dubious construct with limited usefulness as a tool for academic research.

I won’t be able to attend the above conference since I’ll instead be in Aberystwyth to attend this year’s International Ancient Warfare Conference. I also attended last year’s conference and presented a paper; this year, I’ll not only be giving a paper (on mounted ‘hoplites’), but will also have the good fortune of chairing the session on Greek warfare.

Like the conference on heroes in cinema, I won’t go into too much detail, since it is a four-day conference, starting on 30 June. The keynote speakers will be Prof Philip Sabin, who will be discussing new methods in reconstructing ancient warfare, Dr Jason Crowley, who will be talking about phalanx warfare, and Dr James Thorne, on the Grand Strategy of the Early Roman Empire.

Last year, we had the head of marketing from Creative Assembly talk about Total War: Rome 2. This year, Jan van der Crabben, a Total War veteran, will be talking about the difficulties of designing historical war games, with a special focus on the tension that exists between, on the one hand, trying to adhere to historical accuracy, and, on the other hand, actually designing a game that’s also fun to play.

And lastly, Dominic Rathbone, Professor of Ancient History at King’s College London, alerted me a while ago now that the Hellenic and Roman Societies in London will organize a special public conference on ancient armour in London on 20 July. You can download the programme from the website of the Hellenic Society.

A number of well-known researchers will be presenting their papers during this conference. Prof Hans van Wees (UCL) will chair the first session on Greek and Italic armour, during which Prof Peter Krentz (Davidson) will talk about Marathon, Prof Gregory Aldrete will discuss linen body-armour (see also Ancient Warfare issue VII.6 and my review of the relevant book), and Dr Mike Burns will focus on the South Italic cuirass from the sixth to third centuries BC.

If you happen to attend any of these conferences, I’d love to hear from you! Feel free to leave a comment or to contact me if you want to write about a conference or, indeed, if you want to alert me about other upcoming conferences.