The latest issue of Ancient Warfare went to the printer’s last week and should return to the office next week. Issue X.2 deals with ancient Egypt during the Hellenistic era, when it was ruled by a dynasty founded by Ptolemy, one of Alexander’s generals. If you don’t have a subscription, you can pre-order the issue now at a special price.

As you may or may not know, I’ve been very busy of late, filling in temporarily as editor of Medieval Warfare for issues VI-3 and VI-4. For that last issue I will be assisted by guest editor Owen Rees. Owen is a regular contributor to our magazines and knowledgeable about the Norman invasions of Ireland, the theme for Medieval Warfare VI-4. Issue VI-3, which is going to the printer’s probably next week, deals with the Sassanid-Byzantine Wars, and would, I think, be of interest also to readers of Ancient Warfare.

All this work means that I haven’t had as much time to update the blog as often as I would like, but hopefully that will change soon, especially now that we have a brand new editor of Medieval Warfare: Peter Konieczny. You can read his introductory blog post and he’s also just posted another article on how to build a siege tower. Peter will be fully in control of Medieval Warfare from issue VI-5 onwards, which means that from then on I will again be able to devote more time to Ancient Warfare online.

But let’s get back to issue X.2, Ptolemaic Egypt! I’m very pleased with how it turned out. The cover by Johnny Shumate is eye-catching, an explosion of colour. I’m also happy with the range of topics that we managed to cover: the Raphia Decree, the thorakitai (Hellenistic soldiers armed in the Roman manner), the connection between the army and temple-building, Ptolemy II’s battle fleet, the Battle of Antioch, and two articles dealing with the Roman impact on Ptolemaic Egypt. 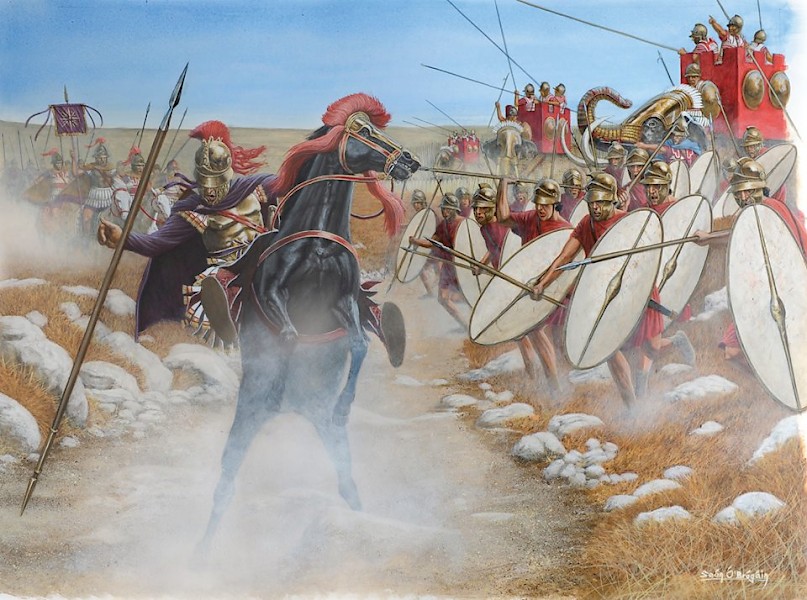 The centrefold for this issue, depicted above, was created by Seán Ó’ Brógáin and depicts the death of Ptolemy VI, who was thrown of his horse and then mortally wounded by Seleucid soldiers. It accompanies Sidney Dean’s article on the Battle of Antioch, which also features two informative text boxes: one deals with Hellenistic Judea and the other deals with the fate of Hellenistic rulers. This article alone, I think, makes the issue a worthwhile purchase!

While we have a stable of good, regular contributors, I am always on the lookout for new blood, and I always strive to include a few new writers with every issue of Ancient Warfare. This issue features three new writers. Alex Zakrzewski has written about urban warfare in Alexandria, one of pieces in this issue dealing with the Roman activities in Ptolemaic Egypt.

The other two new writers each wrote a non-theme-related article. Paolo Morisi has written an article on Roman military tombstones in Britain. Dr Jeroen Wijnendaele, an expert on the Late Roman Empire, has written a very stimulating piece on the barbarization of the later Roman army. He argues that the idea of barbarization is a modern notion. (The article is also illustrator by a new artist, Robert Jenkins.)

Naturally, there’s also another entry in the series on ‘Hollywood Romans’. Graham Sumner wrote about two films: The Robe (1953) and Demetrius and the Gladiators (1954). A full-page illustration depicts some of the costumes worn by the actors, with Graham pointing out what’s right (and wrong) about them.

As I wrote earlier, I’m very pleased with this issue and look forward to hearing or reading your reactions once you’ve managed to have a look at it yourself!