I enjoy cylinder seals. They are small, cut stones used by ancient Mesopotamian cultures to seal a document. They rolled it over a clay tablet to leave an imprint and, in a way, set their signature. The image shown with this blog is an imprint of a seal in the Metropolitan Museum of Art that, on stylistic grounds, can be dated to the first third of the fifth century BC. That would make it Persian, and thereby this particular seal of special interest. 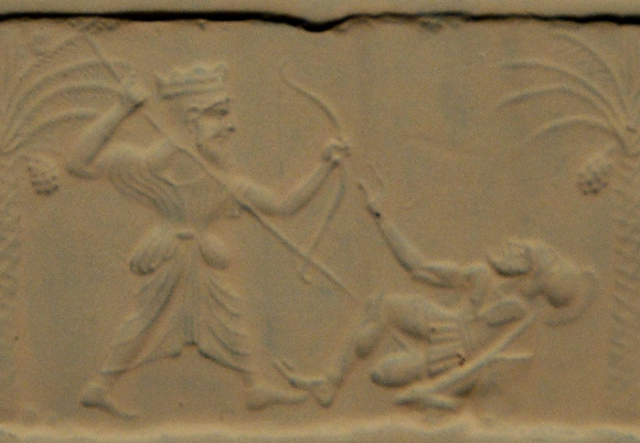 Given the date, the king on the left is either Darius the Great or his son and successor Xerxes. Or it could be 'the King' in general. The king's defeated opponent on the right, however, is what truly makes this seal: he's wearing nicely detailed and very recognisable hoplite gear. In other words, the King's opponent is Greek, and adds specifics to this seal. The interpretation of the king being 'the King' in general becomes less likely: certainly, images exist of rulers fighting 'evil', but Persians generally portray such concepts with, for instance, a lion.

It is then more likely to assume this seal refers to an actual, specific event. That's not uncommon: there is a similar seal usually interpreted as an image of the recapture of Sidon by the Persian king Artaxerxes III Ochos with a local ruler in tow. As far as we know, Darius never defeated a Greek potentate, although his generals did capture islands in the Aegean and they brought rebellious cities in Cyprus and modern western Turkey to heel.

It's a different matter in the case of Xerxes. He commanded a large-scale expedition to Greece in 480 BC, and famously defeated a Greek king at Thermopylae. When something sounds too good to be true, it probably isn't. However, lacking a good alternative the least implausible explanation of the image depicted above is that it shows Xerxes killing Leonidas...

To read more on the Persian Wars, see Henchmen of Ares, and the Ancient Warfare Battle of Marathon Special issue.