Last year saw the publication of the first hardcover special of Ancient Warfare magazine, Edge of Empire, written by Jona Lendering and Arjen Bosman. I recently interviewed Jona on the book, in case you missed it. This year’s Ancient Warfare special will be another hardcover book, entitled Henchmen of Ares: Warriors and Warfare in Early Greece, written by yours truly. The title is inspired by descriptions in Homer of both the Greeks at large and individual heroes as “henchmen of Ares”; the poet Archilochus (active in the mid-seventh century BC) also refers to himself as a “henchman of Ares” in one fragment. 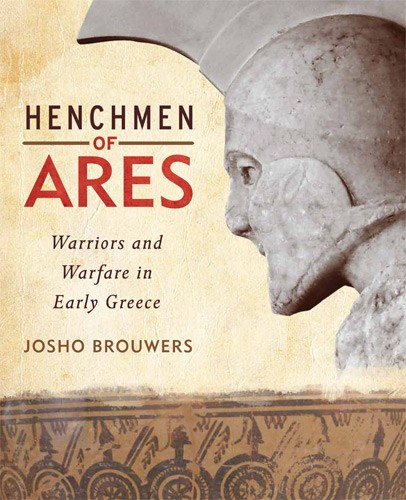 The book is a reworked and updated version of my doctoral dissertation, which I successfully defended at the VU University back in 2010. The original text was organized according to evidence category, so there were chapters on fortifications, burials with arms, Archaic Greek texts, Homer, and so forth. The new book instead has chapters that each discuss a separate period of history, ranging from the Mycenaean Bronze Age down to the Persian Wars. A great deal of academic nitpicking present in the dissertation has been removed when not necessary or otherwise relegated to the further reading section.

Some readers will be pleased to know that footnotes have been removed in their entirety. Instead, important references are now discussed directly in the text. Instead of a normal bibliography, with its endless list of books and journals, a further reading section has been added, written like an extensive bibliographic essay and organized according to chapter. Some of the detail that is normally relegated to footnotes is given a fuller treatment in this part of the book and should shed some more light on particular points of methods and reasoning. All this has been done to make the book easier to use for interested readers. It also offers a neat jumping off point for further study.

Of course, the book also features a wealth of new illustrations, including a plethora of original photographs, all presented in full colour. We have also put our Ancient Warfare illustrators to work to produce some eighteen new, full-colour plates, including reconstructions of Mycenaean warriors, the citadel of Mycenae, seaborne raiders of the Greek Dark Age, the Lydian siege of the city of Smyrna, Corinthian horsemen, and an assortment of ancient Greek ships. Carlos García, of course, will again produce his usual array of high-quality maps.

Synopsis of Henchmen of Ares

The book is intended as a cultural history of warriors and warfare in Early Greece, accessible to a large audience while still academically sound. It features a prologue, four numbered chapters, and an epilogue, following by a list of important dates, an appendix with a subject index to primary sources (so you can find references to ambushes in Homer’s Iliad, for example), acknowledgements, and a detailed and extensive bibliographic essay with ancillary notes that serves as further reading. 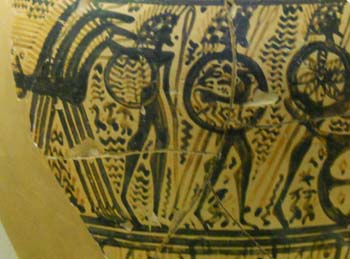 The prologue starts with the death of King Leonidas at Thermopylae in 480 BC. The epic overtones of the struggle over his body are emphasized and this sets the tone for the rest of the book: it is clear that Homer’s shadow looms large over the period under examination – from the Mycenaean Bronze Age down to the end of the Persian Wars – and the Homeric epics will be used as the guide for the rest of the book. The prologue further contains background information on Homer and the Trojan War, and also attempts to place Greece in its proper context as a region in the Eastern Mediterranean that existed on the fringes of the big empires of the ancient Near East.

Chapter 1 discusses the Mycenaean Bronze Age, from the shaft graves first excavated by Heinrich Schliemann in the nineteenth century down to the collapse of the palaces around 1200 BC and the developments of the eleventh century. The “lobster cuirass” found at Dendra is obviously discussed, but more time is spent on the Palatial warriors of the thirteenth century BC and their successors.

Chapter 2 turns to the Greek Dark Age or, more properly, the Early Iron Age (ca. 1000 to 700 BC). There is great continuity from the preceding age as regards chariots and ships, and the warriors of this period seem like a logical evolution from what we know of the twelfth century BC. The warriors of this period appear to have fought mostly in fairly small-scale skirmishes; seaborne raids appear to have been very common. Homer seems to have been active in this period, and his epics shed light on various social and military matters. In the eighth century BC, Greece seems to experience something of a renaissance, which paves the way for the following period.

The Archaic period down to around 550 BC is the subject of chapter 3. This period sees the growth and development of the Greek city-states and the appearance of a new kind of warrior – often clad in bronze armour – in the late eighth century BC, which most would refer to as a “hoplite” (a term that is actually anachronistic). In addition to figurative art and finds of weapons and armour at sanctuaries, we also now have a wealth of Archaic texts compared to before, including fragments of poets such as the mercenary Archilochus and the Spartan Tyrtaeus. 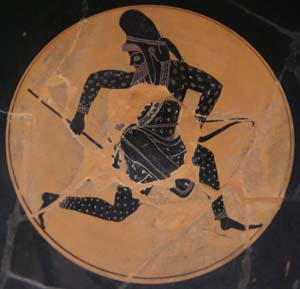 Chapter 4 discusses the second half of the sixth century and the period of the Persian Wars. Herodotus is obviously a major source and features heavily in this chapter. An outline of the Persian Wars and the major battles are provided, but more attention is paid to developments in Greek warfare that, to the best of my knowledge, have received little attention so far, including proof for the appearance of what we might term “phalanx warfare”.

In the epilogue, the developments in Greek warfare noted in the previous chapters are briefly summarized before presenting a detailed treatment of warriors in Early Greece. Just who were these “henchmen of Ares” and how was warfare embedded in ancient Greek society? This leads to a close examination of such factors as the connection between fighting and feasting, the relationship between armour and the male body, and so on.

Even though it’s a few years old now, we’re very happy to see that many people are still reading (and reviewing) Edge of
Read More