Description of the century and maniple

The configuration for the century most frequently given is an arrangement of 10 files and 6 ranks with the files on 0.9m (3’) intervals and the ranks on either 0.9m (3’) or 1. (4’) intervals. Delbrück suggests that each rank was offset to cover the gaps between men and to provide more room for maneuver. The figure shows that configuration for a maniple of two centuries arranged front to back. Some authors say this was a muster or maneuver formation and that in battle the two centuries would have been side by side, as they are depicted a little further on.

By all accounts the centurions led from the front right of the formation. Most authors give the centurion his own file, usually 1.2m (4’) wide.

Each maniple had its battle standards, at least by the late republic. After Marius, the battle standard for the legion became the aquila which was in the care of the primus pilus.

There were three types of horns used for signaling: the bucina, the cornu and the tuba. The three aeneatores (musicians) are shown in the drawing at right. There is some discrepancy in how different authors name the horns and describe their uses. The large circular horn is called either a bucina or a cornu. Some authors state that the bucina and cornu were used to give battle signals and the tuba to give camp and marching signals. Connolly assigns a cornicen to the first century of the maniple and a tubicen to the second century. The bucinatores he assigns to the cohorts. It may be that the same soldier used both the cornu and the tuba at different times and for different purposes.

Following Connolly, a cornicen is assigned to the first century and a tubicen to the second. Their purpose would have been to sound orders to the men, presumably at the direction of the Centurion. With that in mind, their location in the formation would have had to be near enough the Centurion to receive information from him over the din of battle, yet not too close to the front line or else he would be a detriment to the formation. The model places them just behind the standard bearers.

The legion formation based on the maniple arrangement described above is shown in the following drawing. The entire legion has a front of 290m (952’). 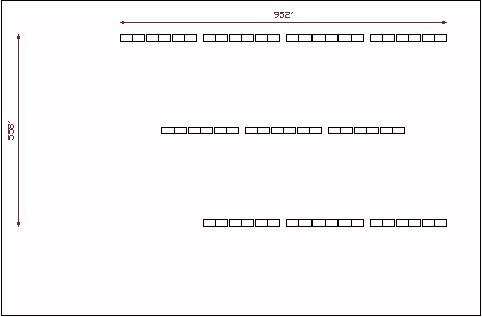 Sword or Spear? The generally accepted view has been that the legionary was primarily a sword fighter and that his use o
Read More

Considering that the Roman army was arguably the greatest military force the world has known, that pretty good eyewitnes
Read More