Gaps in the formation

Following Livy and Polybius, many authors describe a legion formation with gaps between the maniples or cohorts equal to the width of the unit itself so the units of the second line could advance through the gaps while the first line retreated.

Yet, such a formation seems implausible. Other authors argue that the legion could not have gone into battle with such large gaps because the enemy would have used them to penetrate the Roman position. 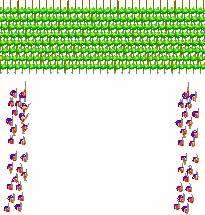 In the pre-Marian legion the tactical units were 120 man maniples. The gaps would have been the same size as the maniples, just wide enough for those of the second line to insert themselves. Because the units were small, the gaps between them were also relatively small. The early enemies of Rome were often other Italian tribes fighting in a phalanx-type formation which did not allow very much flexibility in the battle line. In these circumstances, it seems somewhat plausible that the legion could have employed gaps in its formation. The enemy soldiers would not have been well positioned to exploit the openings without breaking up the phalanx. And, the gaps themselves were not that broad compared with the depth of the Roman ranks on either side.

The drawing on the left shows a close up of the edges of two maniples (red figures) with the gap between them. They are faced by an unbroken body of spearmen armed in the hoplite fashion, 8 ranks deep. There are 21 spearmen across the gap. Along the sides of the gap are 24 Romans. By turning inward they may have been able to thwart penetration attempts.

Over such a narrow gap it may not have been feasible for the phalanx to penetrate without breaking itself up. One can imagine that the first time an inexperienced phalanx encountered the Roman open formation the individuals might not have known how to respond to the gaps. But it does seem that a competent general, facing the Romans on the second time, would have figured out how to attack the exposed flanks of the maniples through the gaps.

The reforms of Marius came at about the time he defended Rome against the Celts. Even if the new cohort tactics were not created specifically for this purpose, they were almost certainly used in these battles. In this legion the tactical unit was the larger cohort. Since the cohorts were larger than the maniples the gaps would also have been wider. Facing the wider gaps were Celts who did not fight in a tightly organized phalanx-style army. The combination of wider gaps and the individualistic fighting style of the Celts would seem to make the gaps less plausible. The figure below shows the broader gaps of the cohort formation and Celtic warriors. The scale is the same as above.

The Celts are depicted as penetrating the broad gaps since it seems incredible that they would not. And it is hard to believe that such a penetration would not be fatal to the Roman attack. Across the front there are 33 Celts, even with generous spacing between individuals. Against their penetration the Roman formation still offers only 12 men on either side. Clearly the center of the attacking line could penetrate to the rear of the Roman formation before being intercepted by those on either side.

Nor would the second line of cohorts been of much use. In the standard descriptions the second lines are described as hundreds of feet to the rear. They could not close in time to prevent penetration by mobile soldiers such as the Celts.

Therefore, although smaller gaps may have been feasible for the early legion fighting against a phalanx, they do not seem plausible for the later legion. Most authorities conclude that the legions did not actually enter combat with gaps in the line and offer ways that the gaps could have been closed and then re-opened as the second line replaced the first. The next section models these mechanisms.

The new infantry model At about the same time that I first developed The Roman Army web page Adrain Goldsworthy’s book,
Read More

Introduction “Getting there is half the fun” would not describe the Roman army’s experience. Army travel was brutally ha
Read More

This page is an attempt to reconstruct a ‘typical’ day’s march for the army. Before showing the marching column there ar
Read More