In addition the legion would have scribes to keep its records and accounts. I have found no sources that give an estimate of the numbers of scribes. I arbitrarily assigned sixteen to the legion: one for each of the ten cohorts, one for the ala, one for the fabri, one to keep the supply accounts, one as an overall paymaster and role keeper, one to the tribunes and one to the legate. 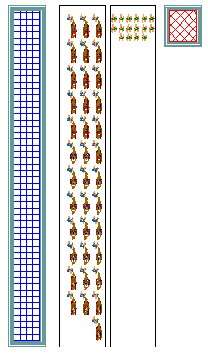 The scribes were probably slaves. I have shown them as unarmed servants on foot. Their tunics are colored green simply to distinguish them from other types of servants and slaves. 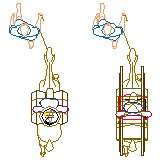 The pack train is very large because the scribes kept the records of the legion and would have had bulky sets of scrolls, blanks scrolls, writing supplies and writing desks. They may even have had charge of pay chests. Because the scribes would have needed a place to work out of the weather it seems reasonable to assign each a tent of his own to protect his records and be his office for the conduct of his official duties in camp. I have also assigned each scribe a pack mule, shown in the detail at left loaded with two boxes of scrolls and other supplies. The mule on the right carries the tent and personal gear. 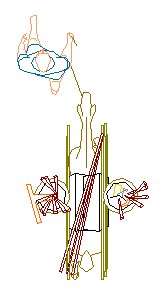 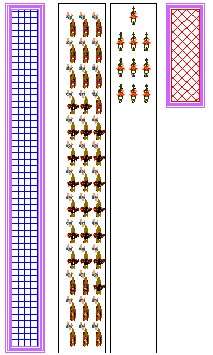 The army always had some body of professional engineers with it for siege work, bridges and roads, fortifications and other construction projects. No specific number is given by any source I have located so all of the numbers here are speculative.Since an army might engage in several construction projects simultaneously, all requiring close supervision by the fabri, I have assigned ten to the legion, one per cohort. Because the fabri would be expected to get around rapidly I have envisioned them as mounted. Because they are assumed to have had some substantial equipment I have assigned a tent to each faber and two additional pack mules. The detail below left shows the pack mule for the equipment. It is intended to represent some of the types of tools the faber may have required -- stakes, a tripod, angle measuring devices, and miscellaneous other tools in the baskets and box.

The fabri may also have had small forges. This is discussed in the next section, The Army.

At some times in the long history of the legion it also carried a variety of artillery pieces with it. The illustration below shows the three basic types. On the left is a ballista, a two armed stone thrower. In the center is the onager, a single armed stone thrower. On the right is a small arrow shooting scorpio. 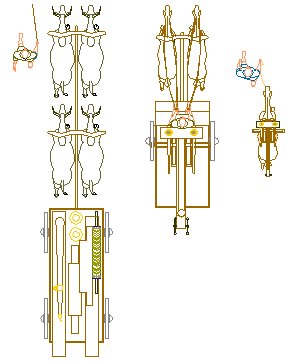 The catapultae were the arrow shooting pieces, the ballistae were the stone throwers. Catapults could be relatively small and carried on a single mule. Judson estimates the weights at 84 pounds for the small ones and up to 600 pounds for the large ones. Even the small ones would require two men to operate them. By Vegetius' time it seems that the legion was equipped with fifty to sixty small catapultae, probably scorpiones, and ten ballistae. In the earlier legions the ballista was preferred to the onager since it was more efficient, under the late empire the onager became the predominate siege weapon.

For the purpose of this model I have assigned the legion three onagri carried on ox wagons (left), ten ballistae carried on two wheeled horse carts (center) and sixty scorpiones carried on mules (right). The artillery is considered to be manned by the soldiers of the legion so no additional force is necessary for its operation.

Imperial legions had an artillery piece, the carroballista, that appears to have been mounted on a special cart. They are depicted on certain panels on Trajan's column. I have not shown them in this model of the march. 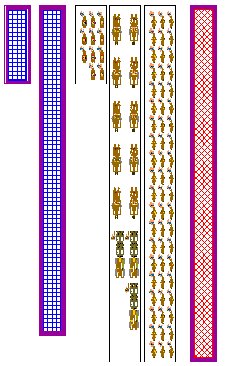 The baggage train for the artillery is shown at the right. The column to the far right shows the sixty scorpiones on mules. The middle column has 10 two horse carts with ballistae on them, followed by three four-ox carts. The short column on the left shows the mules carrying the tents necessary for the 73 muleskinners and drivers.

A note on ox-drawn wagons: although I show three ox-drawn wagons carrying the heavy siege artillery, it is unlikely that these wagons would have accompanied the legion in the regular order of march. Oxen can only travel about 1 mile per hour, while the legion as a whole would move at about 3 miles per hour. It is more likely that whatever heavy wagons the legion required traveled apart from the legion as part of its supply and support corps. For more information about Roman transport see Equipment. 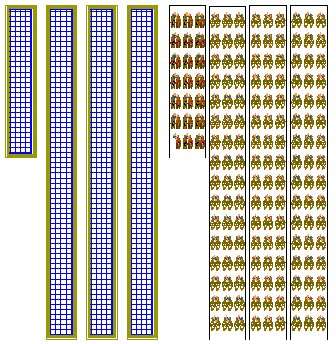 Peddie describes the army as carrying an extra three day's rations on mules, this is in addition to the rations carried by the soldiers. In his scenario, the army would eat the mule-carried rations first, freeing these mules for carrying food found in foraging while on the march.

The legion I am describing has 6,421 men to feed (including servants and non-combatants). If each man has a three pound grain allotment per day, then it would take 96 mules to carry one day's food supply. If the legion took a reserve of three days rations there would be 288 mules in the pack train. That pack train is shown on the right.

The servants leading mules with tents have duties to perform in camp -- unloading the mule, setting up the tent, preparing food, attending to the needs of the soldiers. Servants leading pack mules such as these do not have any particular work to do at the end of the day other than hobble the mules and see to their feed and water.

It seems reasonable, therefore, to assign one man to each two mules. The illustration on the left shows this arrangement. Each mule carries two 100 pound sacks of grain as rations.

Judson has a different estimate of the food requirements. He rations 1.66 pounds of grain per day per soldier and has each soldier carry 17 days rations, 28 pounds. This contrasts to Peddie's 3 pounds per day, 10 days rations carried by the soldiers, three on mules. At Judson's ration the 288 mules could carry about 5 1/2 day's rations.

For both the food and the supply baggage train, one servant handles two tent-carrying mules as well. 41 mules are required to carry the tents for the servants. 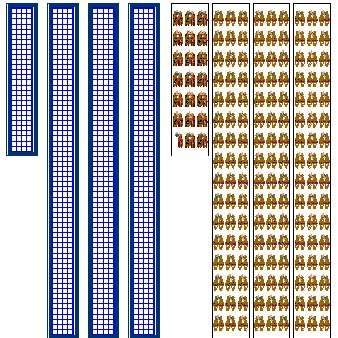 Peddie notes that the army must have had significant quantity of extra supplies such as tentage leather, clothing, weapons, cordage. Since no authorities specify a quantity for the supplies, I have assigned the same number pack mules for supplies as were assigned to carry food, 288 per legion. The formation is shown on the right. As with the food train, two mules are assigned to each servant, as illustrated below.

The stakes found at some locations are interpreted as additional defensive works. They are, typically, about 5' long, tapering from a maximum width of 4" at the center to a point on either end, with a recessed "handle" in the middle. Each soldier may have carried one stake or they could have been carried by mules. If the stakes were tied together to create an additional defense on top of the walls of the camp then 6852 feet of wall would need to be covered. The stakes are about 4" in diameter, 3 stakes to the foot would require 14,506 stakes to defend the entire circuit of walls. Since there are about 19,440 legionary soldiers in the typical 4 legion army there would be enough stakes for the purpose if each soldier carried one. A stake of dried wood some 5' long, tapering to both ends and only 4" wide at the widest would not weigh more than several pounds. One mule could conceivably carry 100 of them, 145 mules for the entire supply or 36 mules per legion. The burden for one mule would be a bundle of 10 by 10 stakes, or 40 by 40 inches, perhaps not too heavy but possibly too unwieldy for a single mule load. However, since the use of stakes in all eras is unknown, and when used they may have been carried as a part of the soldier's burden, this model of the march does not include additional mules for hauling the defensive stakes. 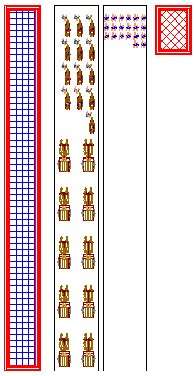 Peddie says that in at least one verifiable example the number of sick in an army was between 300 and 500. Even if a large number of other servants were used in their care, it would seem that at least 10 or 20 medical staff, doctors, would be required for their care. I have assigned 20, two per cohort. I have envisioned them as sharing two to a tent but having an additional 20 servants as assistants.

Wounded soldiers may have been carried from the battlefield on their shields, but those not able to walk would have had to have some alternate form of transportation, either to get from camp to camp or to be returned to some more secure base camp. In either case, it would seem likely that the legion would have some type of ambulance carts available for this purpose. For ambulances I have allowed 1 light two wheeled horse-drawn cart per cohort, driven by one of the assistants. The remaining 10 assistants care for the mule train. 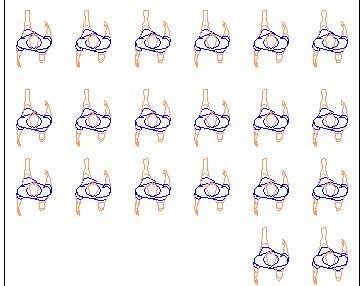 Trajan's column shows soldiers being cared for by what look like other soldiers. However, it seems that most doctors in the Roman world were slaves or freedmen. Therefore, if the legions took actual doctors with them then it seems likely that they would have been slaves or freedmen, not soldiers. The soldiers themselves may have assisted in caring for the wounded, analogous to field medics.

The presence of actual doctors in the legion, at this point, is speculative on my part. I am tentatively providing a medical unit of 20 unarmed doctors, illustrated on the right.

An ambulance cart is shown in the illustration at the left. The cart is shown empty. It would probably be filled with either wounded or sick men or with legion baggage and equipment.

This model does not show special hospital tents; their presence and size would be purely conjectural. It seems reasonable that the very ill or seriously wounded would be cared for at some kind of central aid center, a field hospital of sorts. If there were hospital tents they could have been relatively small, on the same order as an officer's tent which could easily be carried on the ambulance carts. On the other hand, it is likely that the very ill or gravely wounded would not continue to accompany the army but would be left behind in some kind of secure base camp, reducing the need for a hospital. Since it is at least possible that the hospital tents, if there were any, were quite similar to other types of tents I have not created a new tent model. Nor have I enlarged the baggage train to include special transport for them.

All of the above elements are part of a single legion.  When they are all put together the marching column would have these elements in it:

The top line represents soldiers and other military units. The bottom line indicates the corresponding baggage train for each unit.  In some cases (signiferi, aeneatores) there is a baggage train element where there is no military unit.  This is because, as noted above, the individual signiferi and aeneatores were dispersed among the legionary cohorts or the turmae of the ala.

There is a mile and kilometer scale in the center of the illustration. The overall length of the formation is not accurate because 250 feet were allowed between each unit to make the elements easier to distinguish.