Model of the charge

Model of the charge of an individual in the first rank 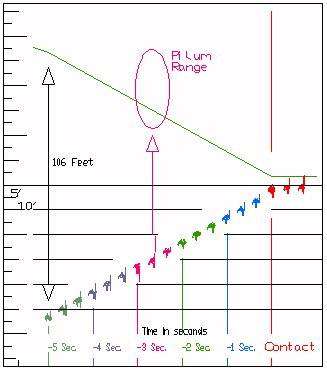 This drawing requires some explanation. It is a time and distance graph of the charge of a single soldier. The horizontal (X) axis is time, divided into seconds before contact with the enemy. The vertical (Y) axis is distance marked off in 5 and 10 foot increments from the "battle line." The positions of the enemy at various times are represented by the slanting green line on the top half. The enemy is represented as charging at the same speed as the Romans.

Each second is divided into thirds, corresponding to the running pace of three steps per second. Each figure has moved by exactly one pace and 1/3 of a second from the previous one. The figures are colored in groups of three so that each color represents a full second.

The diagram shows 18 successive positions of a single soldier in the first rank as he charges the enemy line.

The first position at the bottom left is the last marching step. The next 5 figures are the running charge. The first two red figures are reaching back and then throwing the pilum. The last red figure and all of the green figures are engaged in drawing the gladius. The blue figures show the last one second before contact.

When the pilum is thrown the front line of the enemy soldiers, represented by the green line, is 60 feet away.

Revised model of the charge

The above diagram is inaccurate because it fails to take into consideration the movement of the enemy while the pilum is in flight. A revised diagram is shown below.

The illustration above shows a few more positions that the original one. In the revision the position of the soldier is shown for each quarter of a second while marching (far left) and for each one-sixth of a second when running. The vertical red lines indicate one-second intervals. The horizontal lines are at 5 feet. The actual position of the pilum at each one-sixth second interval is shown. The throw is modeled on an ideal 45 degree arc. The actual arc would probably be less, reducing the flight time of the pilum slightly. In the above model the pilum is thrown so that an average 60 foot throw (the furthest pilum shown) would still be head-high as it met the enemy.

The close up below shows the final seconds of the charge, from the time the pilum is thrown to the encounter with the enemy.

The effect of taking the motion of the enemy into consideration was to allow the pilum to be thrown earlier. In the original model the pilum was thrown 2.6 seconds before contact. In this model it is thrown a full second earlier. This may not seem like much but in fact it provides a substantially greater time for the sword to be drawn and the line to prepare for engagement.

The animation at the left shows the same figures as in the revised drawing, assembled as a animated gif. Grass and 5' line markers indicate the progress over the field. The view is as if the observer is hovering directly over the soldier. The time intervals for each frame are accurate; that is, the walking pace is 2 30" steps per second, the running pace is three 40" steps per second. After the soldier meets the enemy line forward motion stops and a series of fighting stances is illustrated. The timing for these positions is arbitrary to increase the sense of realism.

Details of the charge (from the original illustration)

This drawing shows the last 2 2/3 seconds of the charge. If the range of the pilum was 60' and both lines are running together, then there is only about 2 seconds between the time the two lines are within pilum range and when they close for hand to hand combat. The first line must throw as soon as the enemy comes within range, for from that point there is barely enough time to draw the sword and prepare for impact. At the moment the first rank is in range and throws the second rank is at least 2 meters (6 to 8 feet) out of range; and all ranks beyond the second are hopelessly out of range. In this model all six ranks could not throw their pila simultaneously. 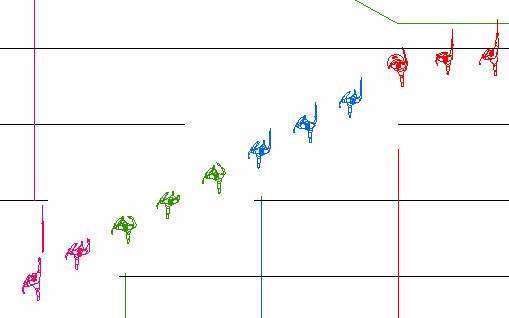 The charge of all six ranks

The model below shows the charge of all six ranks. It uses the same 18 positions of the soldier in the first rank that were shown above and adds the positions of the other five ranks; these are frames 1 through 21 below. Frames 22 through 30 are added to show the rear ranks closing up. Each frame represents 1/3 of a second and one pace by the soldier in the first rank.

Color coding has been added to make the diagram easier to read. Soldier who are marching are colored green;, those running with the pilum are blue; throwing the pilum, red; drawing their swords, purple; and swords fully drawn, ready to make contact, orange.

In Frame 1 the first rank is 18.3m (60') from the line of contact, the sixth rank is 24.4m (80'). All of the ranks throw their pila at about the same point on the field, approximately 9m (30') from the line of contact (Frames 10, 12, 15, 18, 21 and 24). When the first line throws (Frame 10) the enemy, presumed to be also charging, is about 18m (60') away. Some pila may fall short but will still serve a useful purpose by impeding the charge of the enemy. By the time the time the fourth rank throws (Frame 18) the first rank has already engaged the enemy in hand to hand combat. Ranks four through six throw up over the heads of the first rank and should clear their heads by about a meter.

It is also possible that the 3rd and later ranks did not throw their pila until fully closed up, stopped, took a step or two and threw. That scenario is not shown.

The next two drawings are enlargements of the one above to make the details more visible. In these enlargements the color coding has been changed to assign a different color to each rank. 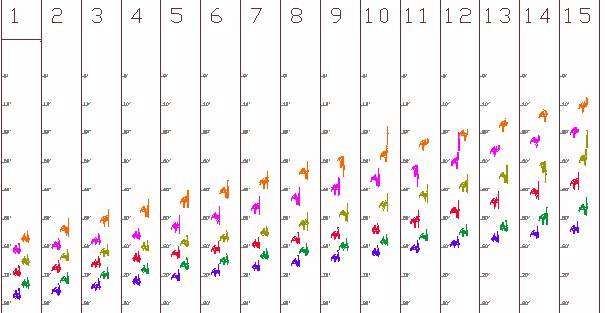 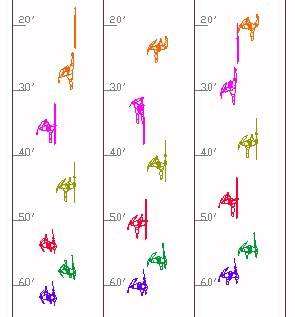 In the following drawings selected frames have been blown up to show detail.The enlargement on the left of Frames 10, 11 and 12 shows how the distance between the ranks is increased as soldiers in each rank begin running a few steps before those in the ranks behind. In Frame 10 the first rank throws his pilum when about 60 feet from the enemy line. In Frame 12, when the second rank throws, the enemy line is about 50 feet away. In these frames the soldiers in the 5th and 6th ranks are still walking.

Frame 18, the single panel on the right, shows the 4th rank throwing the pilum. The soldier is about 27 feet from the line of engagement and should throw well over the heads of his comrades in the front rank.

Frames 24 through 29, below, show the sixth rank throwing the pilum from about 30 feet and then closing up. The final position shows how all six ranks would have crowded together as they actually meet the enemy. Gone are the orderly ranks and files. This compressed and disorderly mass of men pushing against the enemy is the description of battle that seems most accurate.

If, indeed, actual battle was chaotic, not orderly, then the problem of reforming neat ranks and files so that they could be withdrawn through the gaps and replaced by other units is even more formidable.

Alternate model of the charge

A number of comments were received on the model of the charge. The time provided for the throw seemed inadequate. An earlier model I developed placed the two centuries one behind the other and had the soldiers of the second century pause in their charge at about 40 feet from the front line and then, on the command of the centurion, one rank at a time, take a short run, throw and then join battle. 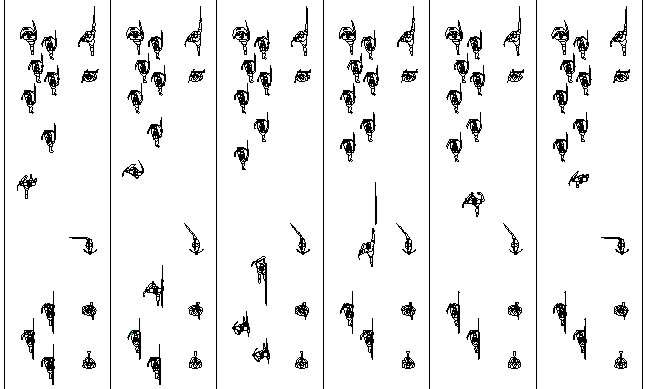 What is shown above are positions 69 through 74 of the 92 positions in the model. Only one file is shown, but every other rank is staggered so that it looks like two. Each century is 5 ranks deep in this formation. Possible positions for the signifer and aeneatores are shown. The signifer is placed directly behind the first centurion. Both aeneatores are placed at the rear of the formation. In the frames shown the first century is fully engaged in sword fighting. The first two ranks of the second century have already thrown their pila. In the first frame on the left the second centurion, standing sideways, is extending his arm to hald the last three ranks. Once the soldiers of the second rank are clear, frame two, the centurion signals that the third rank can advance and throw while the 4th and 5th ranks take a step forward to re-position themselves.

I had previously discarded this model because I came to think that the centuries fought side by side to close the gaps and also because the model seemed too complicated. I have resurected it here simply to illustrate another way the pila could have been thrown. From a comment made by one re-enactor, I gather that some of these groups do throw on command. Perhaps elements of this model are useful in thinking about how it might have been done.