The following schematic shows two post-Marian armies of four legions each with thin lines of skirmishers deployed in front of each army. In the post-Marian legion the auxiliaries used were funditori and sagitarii who had a much greater range than velites and, consequently, the armies would have had to deploy further apart. 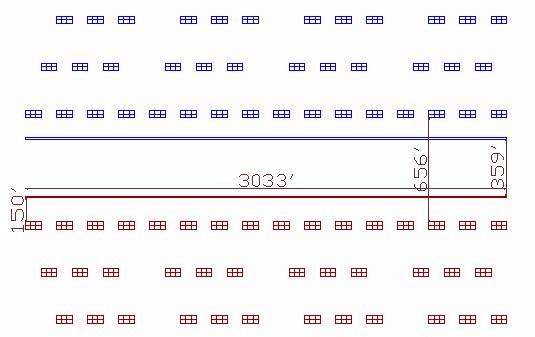 The two lines of skirmishers are 46m (150’) in front of their respective armies and just over 91m (100 yards) away from the opposing line of skirmishers. If 91m is taken as the maximum distance for direct aimed fire then a range of about 107m (350’) between skirmish lines would serve to protect the skirmishers from aimed fire from the enemy skirmishers yet put them close enough to reach the opposing army with lofted volleys. The two arrows indicate the 182m (600’) range of skirmish weapons; it falls slightly behind the first battle line. Given a certain variation in distances this would ensure that the majority of the missiles fell upon the massed soldiers in the first line of battle. The two armies are just over 198m (650’) feet apart, giving each about 100 meters to close for combat. At full speed they could close the distance in about 30 seconds.

While none of the distances are based on definitive evidence, taken together they seem plausible as a general model for the placement of opposing armies and skirmish lines.

Sword or Spear? The generally accepted view has been that the legionary was primarily a sword fighter and that his use o
Read More

Considering that the Roman army was arguably the greatest military force the world has known, that pretty good eyewitnes
Read More

The new infantry model At about the same time that I first developed The Roman Army web page Adrain Goldsworthy’s book,
Read More