In Jasper’s GWS 2019, Take my money! post, the question on planned hobby spending is addressed. Taking two components of Jasper’s summary, I dive into an analysis of hobby spending viewed by age group and primary hobby interest. Three questions examined include:

As in my prior post on “The Battle of the Bulge”, a foundation regarding assumptions and caveats needs to be in place before the analysis and inferences are presented. Of course, those earlier caveats still hold.

First, a discussion on categorizing respondents based upon primary hobby interest.How do we assign a respondent’s primary interest? Question 11 asks:

Do you consider yourself mostly a historical, or more a sci-fi or fantasy wargamer?

Second, selections for hobby spending were given in spend bins with the following progression:

I added the ‘$’ symbols to aid in report displays. Reports and charts will be in USD.

Computing meaningful point estimate statistics from data built upon wide range bands that vary in size (exponentially!) requires another judgment. For this, I stuck with Miles’ precedent of using each ranges’ midpoint as the point estimate. For the ‘$$$$$’ spend band, I simply used the lower bound ($2,801 for USD). These are the averages Jasper reports in his Take my money! post. When dollars are shown, keep in mind these are means based upon range midpoints.

With the preliminaries out of the way, time to turn to the analysis. 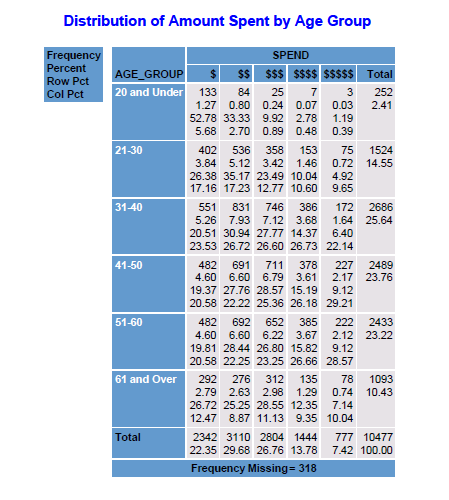 First up is a look at Amount Spent by Age Group. What do we find? Over half of the respondents in the “20 and Under” group spends in the ‘$’ bin of under $350 annually. No surprise there. As a gamer ages, spending, on-balance, increases, but the majority of annual spending remains in the first three spend bins. From age 31 and over, about 28% of respondents spend between $700 and $1,400 annually on the hobby. Roughly 15% of respondents in the 31-60 age groups spend between $1,401 and $2,800 per annum. About 9% of the respondents in the 41-60 age groups spend over $2,800 annually. Notice that the 61+ group sees spending at the upper spend ranges decline. Still, this group spends on par with the 31-40 year olds. 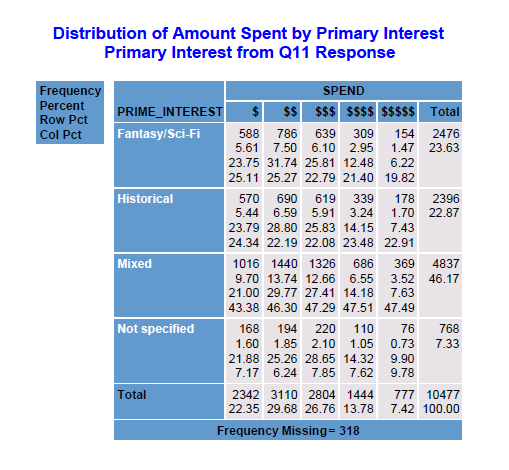 Next up is an examination of annual spend by primary interest. Primary interest is defined above and classifies respondents into four groups. These groups areFantasy/Sci-Fi, Historical, Mixed, and Not Specified.  Some survey respondents did not choose a value for Question 11.

What can be gleaned from this table?  The distribution of spending amounts is similar to the table showing amount spent by age group.  The spending profile of Fantasy/Sci-Fi gamers looks very similar to the spend profile of those 40 and under. The data seem to suggest that the big spenders are those not specifying any primary interest. Historical gamers tend to have a few more big spenders than do the Fantasy/Sci-Fi gamers. Could this difference be age related? 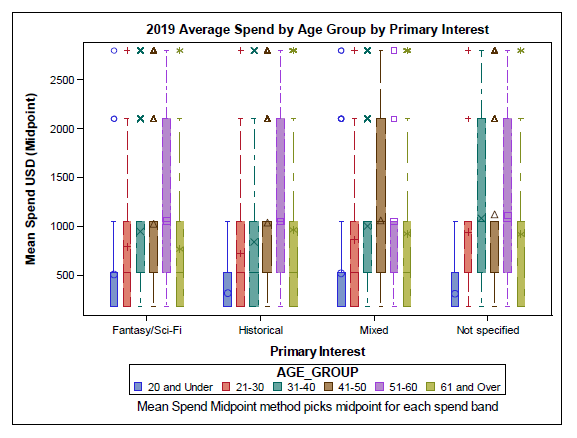 The next pair of charts moves away from analysis based upon spending bins and presents the data based on dollars spent. As explained in the foundational assumptions at the beginning of the post, these analyses use the midpoint of each spend bin to compute summary statistics. Now, the respondent may have an annual spend anywhere between the selected spend bin’s lower bound and upper bound but the assumption for this purpose is that the midpoint is the point estimate for every respondent. 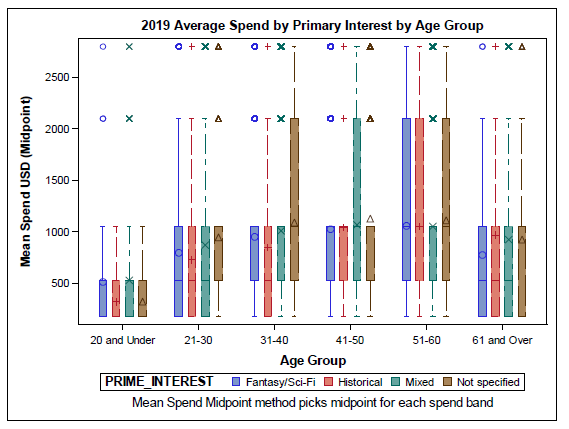 What inferences can be made from these two charts? Below are a few observations and generalizations but there are many more: 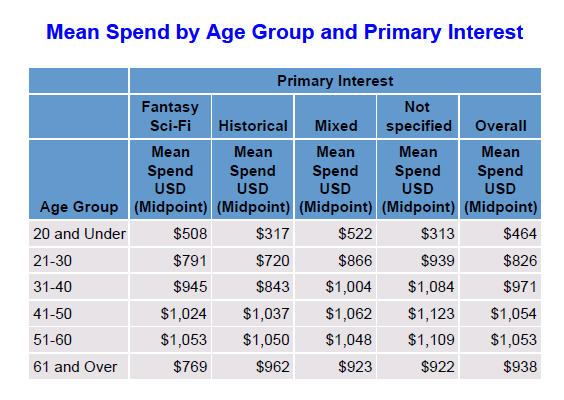 Can the answers asked at the beginning of the post be answered? Yes.

The results on hobby spending, intuitively, make sense although I am somewhat surprised by the apparent age split between Fantasy/Sci-Fi and Historical. Intuitive results are good and reinforce the integrity of the survey responses. As for planned hobby spending, I typically plan to spend less but often spend more. Perhaps these numbers under-estimate actual spending?

There are many ways remaining to dissect the spend data but that can be left for another time.One question that comes to mind is: does location matter?