Despite that, every edition of the Great Wargaming Survey does offer clues to an answer. The main GW games are so big that we single them out in the theme/era questions to avoid skewing the rest, for instance. Moreover, we can combine the results of certain questions: great popularity of WW2, tournament-style gaming and 15mm would suggest Flames of War (an example - not quoting from the survey!)

Now that we have a series of surveys, however, another hint has appeared. 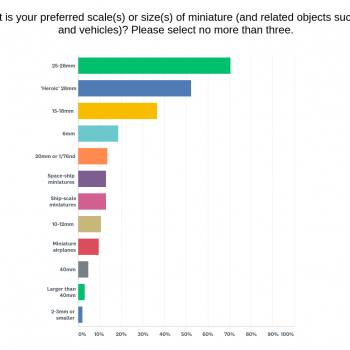 I suppose that the saying about boys and the size of their toys just doesn't work very well for wargamers. But we have asked respondents about the preferred size of their miniatures since 2014, skipping one year only. The questions weren't always exactly the same, but Miles Reidy normalised the results for us. So what do the results show?

For each year in the survey, 28mm is the preferred size, no doubt about it. Heroic 28mm (mostly to allow for you-know-you) is always number two. Together they have always taken the bulk of the votes, followed by 15mm at some distance. 20, 10, and 6mm are the last sizes with more than 1% of the vote. That's what it always used to look like.

Now that we have several years of results, though, a trend is becoming quite clear. Comparing 2019 and 2015, 28 and Heroic 28 have lost quite some ground from a combined 64% to 49%. A few other sizes also lost a bit, or switched places, but that clearly wouldn't account for 15%. Where did that go?

Baccus, Adler, Irregular, and other 6mm manufacturers will be pleased to hear that their preferred size went from 4% in 2015 to 7% in 2019. The biggest notable change is not in the figure scales, however, but in game-specific scales. What we called the airplane, ship, and spaceship-sizes. It's a bit awkward and they are each to some degree a catch-all, but it is very notable that they came from a total of 0% in 2015 to 4%, 5% and 5% respectively last year. Is this the influence of the various Star Wars miniatures games, as well as games like Cruel Seas? Quite possibly.

Stay tuned for 2020 and we'll see if the apparent success of Black Seas is borne out in the survey.