In Jasper’s GWS 2019 - The Basics, post, he brings attention to ‘age pyramid’ attributes present in the 2019 data. This ‘age bubble’ or bulge has been mentioned before in past GWS recaps. Anecdotally, discussions on age frequently are reduced to lamenting the graying of the wargaming hobby in general and historical wargaming in particular. This inter-generational discussion has been brewing for years. With six years of surveys, do these data support the hypothesis of the graying of the hobby?

Before diving into the survey results on aging, it is important to draw boundaries around the insights in which these surveys can be expected to provide. First, these surveys are a form of convenience sample. Specifically, these are unrestricted, self-selection surveys. That is, anyone with access may participate. There is no scheme for identifying a statistically valid sample from the wargaming population. Without having a statistically valid sampling method, results cannot be generalized to the larger population unconditionally. Bias may be introduced. This form of sampling does not negate the usefulness for research, though.

The Battle of the Bulge

After this brief digression to the caveats of survey sampling and the need to be wary of inferences from the results, time to return to the topic at hand. That is, aging and the perceived Battle of the Bulge.

Even given the inference caveats highlighted above, these GWS surveys provide six years of useful data. Summarized by Year and Age Group, Figure 1 illustrates the respondent counts and bin percentages for each category. As an example of reading this table, 2019 had 10,795 respondents. Of those 10,795, the ‘61 and Over’ age group bin had 1,120 respondents. These 1,120 61+ respondents represented 10.38% of the 2019 total and 2.15% of the entire study total. 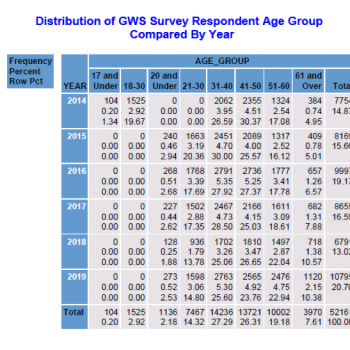 Note in the first year of the survey, 2014, age binning was different from the remaining survey years. With this inconsistency, 2014 will be removed from further analysis. Since the ‘20 and Under’ age group is under-represented based on the response that almost 77% of gamers enter the hobby during this age, the ‘20 and Under’ age group will be removed from further analysis. With less than 3% of the respondents present in this category, removing this low percentage group is a reasonable consideration for later analysis. Figure 2 shows the resulting baseline data used for these analyses. 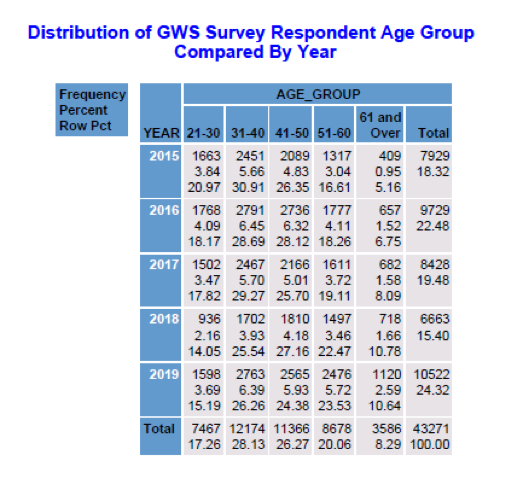 Rather than focusing on these data in tabular form, Figures 3 and 4 provide a graphical representation of these data. Notice in these two graphs that the 31-40 Age Group takes the title of ‘bulge’ in all years except 2017. Throughout these five years of surveys, the age groups, 51-60 and 61+, exhibit a steady increase in influence. This increased market-share seems to be at the expense of the under 40 groups. The shift in respondent demographics seems to hit fully in 2018. Between 2017 and 2018, the under 40 groups saw market-share fall from about 47% to 40%. During this same period, the 51+ age groups saw their share increase from about 27% to 34%. 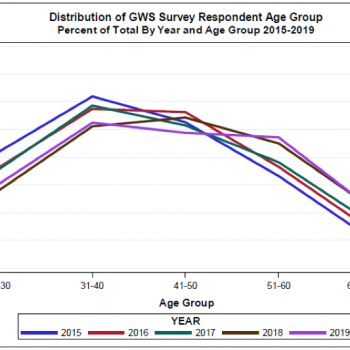 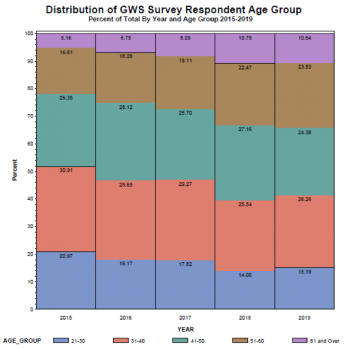 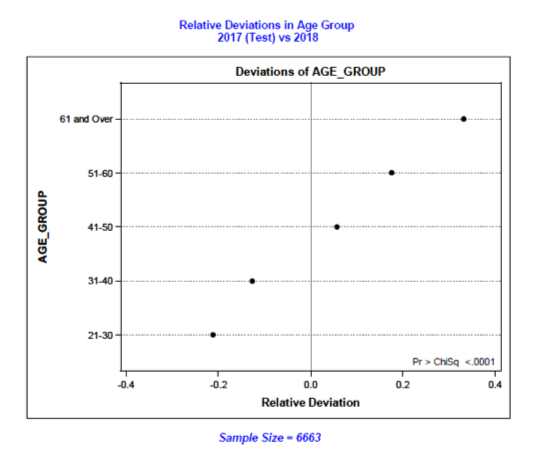 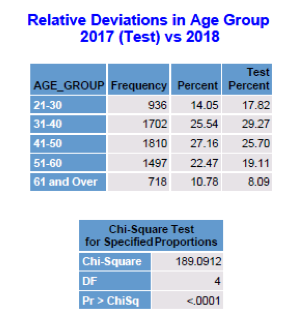 n a statistical sense, are 2017 and 2018 age proportions different? Using Goodness of Fit statistics, there is a significant difference in the distribution of age group proportions between 2017 (my test year) and 2018. The largest relative deviation between the two years is in the ‘61 and Over’ age group. A shift in age is evident in the 2018 responses. The 2018 responses showed a marked drop in responses from the other years, though. Could this lower response rate explain the significant difference seen between and 2017 and 2018? 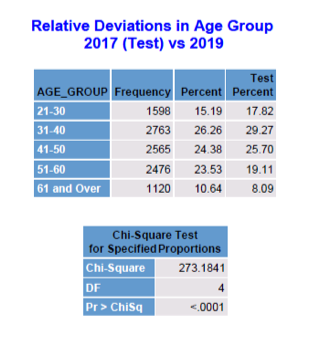 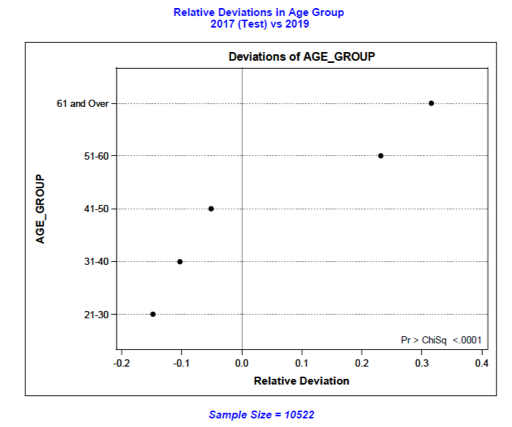 To test that hypothesis, 2017 and 2019 are compared in a similar fashion. Again, the largest relative deviation between the two years is in the ‘61 and Over’ age group with the 51-60 not lagging far behind. Based upon these data and the caveats on survey inferences outlined upfront, wargaming respondents are aging but the under 40 groups still claim more than 40% of the market.

From these analyses, can we conclude that the hobby is graying? Given the cautions provided earlier on making inferences from these data, the hobby appears to be aging. Does this Battle of the Bulge suggest wargaming is dying? Not necessarily. Ranks of the veterans are being replaced by new recruits but perhaps at a slower rate. These new recruits may not all be historical gamers (a topic for another time) but gamers, nonetheless.

The biggest influence to consider is that of national and even global demographic trends. Wargamers may simply reflect the larger demographic forces at work. Following WWII, North America and Western Europe experienced a population boom. This generation born between 1946 and 1964 is coined the Baby Boom generation. Jasper noted that nearly 72% of all respondents originated from North America, UK, and Ireland. By 2015, all baby boomers could be found in the 51+ age groups. By 2016, those respondents at the midpoint of the 1946-1964 baby boom range (born in 1955) would find themselves in the 61+ age category. Yeah, I’m talking about my generation. With the affluence and longevity of this generation, we may be present in the hobby a long time. As my daughter would say, “OK Boomer.”