With nearly two weeks to go on the Great Wargaming Survey, we’ve had nearly as many responses as last year (currently 7300, last year 7759). Hopefully those extra weeks will provide a new record number of responses. Though it’s obviously way too early to draw any conclusions, it’s terribly tempting to take a very quick peek. So I did…

TL;DR: the respondents are more varied in age, more positive about their hobby and more social than last year. Read on for more information, and always keep in mind: these are the results based on responses up to the point of writing. No more, no less.

The first thing that stands out is that we’ve so far apparently reached a different audience. Only about 31% indicates they took the survey last year. That means that in theory this survey could be an interesting check for last year’s. After all, if a (largely) different population gives similar answers, that would reinforce last year’s results. We also definitely need to get more feedback from Continental Europe as that’s staying behind a bit. 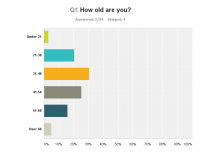 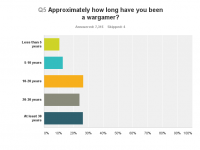 When it comes to what aspects of wargaming are important, 71.3% (‘14:60.8%) indicates hanging out with friends is very important to them, 67.5% (‘14: 40.7%) loves playing the game and while researching the background is very important to many 57.9 (‘14: 54%), painting the figures has skyrocketed (note: perhaps because we phrased it better) from 33% indicating it was an important aspect of the hobby in 2014 to 60% this year.Respondents also spend considerably more on their hobby than last year… 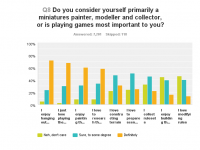 There’s plenty more to compare to last year of course, but it’s perhaps also interesting to take a quick look at the results of some of the new questions. We asked, for instance, how often to you get to play a game? Just over half of the respondents indicate they play weekly or a several times a month But while 7% get to play more than once a week, 22% indicate they play only several times per year. Perhaps that too shows that for many preparing for a game, in all the ways that there are, and talking about the hobby online and offline, are just as important as actually getting to roll the dice. We also asked about the size and age distribution of respondents’ gaming groups. It appears that some 40% play in small groups of up to four people, 30% in groups smaller than 10 people and 22% in larger groups, presumably clubs. The outcome of the age distribution is, I thought, very interesting. Nearly 50% state they play with people roughly their own age. Whether ‘greying of the hobby’ is true or not, this could explain a perceived ageing. After all, if you play in a small group with people your own age, your group will get greyer over time if there’s no influx of new blood, irrespective of what’s going on in the hobby as a whole.

That’s it for now. Thank you so much to everyone who took the time to respond to our questions, thank you very much to all those who helped to spread the news, and if you haven’t filled out the survey yet, there’s still plenty of time!