Huzzah, a question to answer with the responses from last year. Yes, clearly it's not my fault we're not up to 31 Questions, it's yours, dear reader, for not supplying enough questions... Errr... Ok.

Last night, I had a communiqué from Richard Clarke, promising to give any required attention to dikes, windmills, and tulips on his next Lardy Oddcast (recommended! Their YouTube channel seems to be the best place to find them - don't worry, it's sound only) if I could only provide some data about the apparent rise of semi-skirmish games and the decline of large scale battles.

As I'm very much in favour of dikes keeping the sea out, I think they can't get enough attention, so, happy to oblige!

First, a quick announcement. If you've listened to the latest WSS podcast, you already know this, but the 2018 Great Wargaming Survey begins this coming Wednesday, August 8th at noon UK time. You'll be able to reach the survey via www.greatwargamingsurvey.com (leads to the reports overview until that time).

I think that in this case, it might be helpful to look at the results of both 2016 and 2017, because the former included a few specific questions that were cycled out in 2017. We are, of course, dealing with a problem of definitions in that a Peter Berry of Baccus Miniatures might only consider something a large scale battle when it involves several Army Corps in 6mm. In contrast, a GW Gamer who enjoys Kill Team might consider an (old style) 2000 points 40K game a 'big battle'. In other words, those definitions are hardly absolute, and the possible answers to the question "What style of tabletop wargaming do you prefer?" could have been better selected. Lesson learned. Still, let's start with that. First the chart for all respondents. 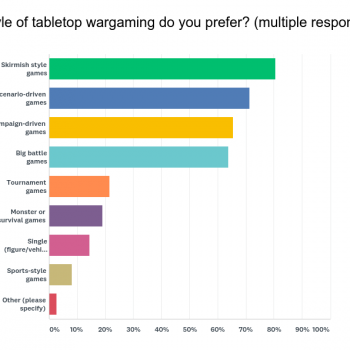 What style of game do you prefer? Click to enlarge 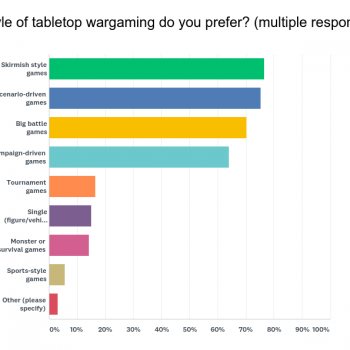 What style of game do you prefer / historically inclined gamers. Click to enlarge. 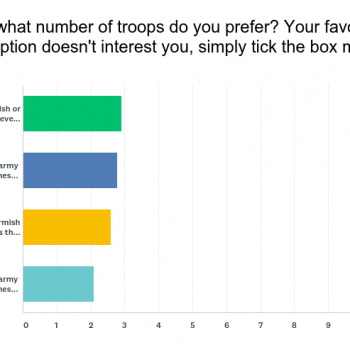 How many troops do you prefer to command, from the 2016 survey. Click to enlarge.

Clearly, the 'platoon-size' games are still at the top, with 'small army' a very close second. Only 6% don't care for either of those two at all, compared to over 15% showing no interest in the very largest games.

We've never asked what size of army people like to paint - that might be illuminating - but we did ask in 2016 how many people respondents enjoyed having at the table. Just over 65% prefers a straight-up 1 on 1 game. We also asked what kind of game length people enjoy. There was again a clear winner: 68% wants their games to be long and short enough to comfortably fit an afternoon or evening.

It is obvious that a large-scale game, whatever exactly that means, implies more of an investment (in figures to collect and paint, time to set-up, time to play) than a smaller scale game, excluding the terrain perhaps. The results of the survey certainly do not seem to spell doom for the larger scale game, but practicalities favour the smaller competitors.