As mentioned in the previous post on The Great Wargaming Survey analysis (see: GWS2020: Game Period, Type, and Figure Size, Oh My!), I wanted to explore the effect of adding Age Group into the mix of already scrutinized attributes. In addition to game period, game type, and figure size; age group is tossed into the blender and given a spin.

Like previous analyses, multiple correspondence analysis (MCA) will be the tool to compute groupings in an attempt to differentiate the various attributes. How the survey respondents' favorite period, type, and size group with respect to age (and each other) is illustrated below. Adding age group into the analysis does not alter the relationships between period/type/size much, but adds an interesting dimension into the picture. 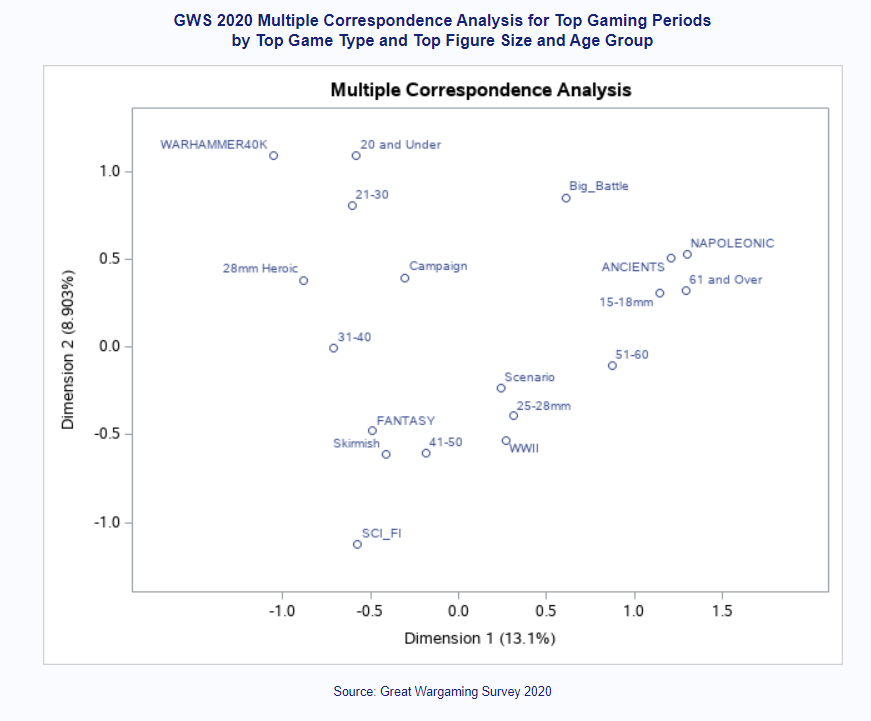 Are patterns easily discernable? Clusters of attributes appear in Figure 1. To make sense of these data points, overall results are broken down into manageable chunks to isolate some of the interesting relationships. 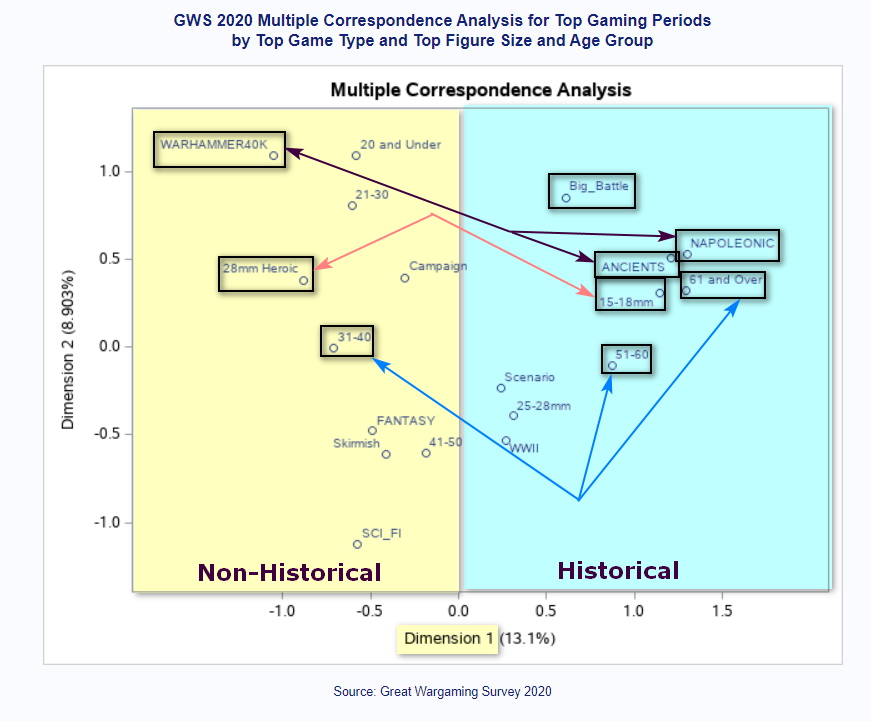 These results suggest there is a clear separation between non-historical and historical wargamers in general and these subgroups in particular. For example, wargamers in the 31-40 age group hold gaming preferences different from those in the 51+ age groups.

This time, MCA focuses on Dimension 2. Only the attributes contributing to the Dimension 2 are denoted by borders surrounding their placement within the grid. In the figure below the attributes that are boxed in gray did not contribute in Dimension 2 explicitly, but are assigned to Dimension 2 as the "Best" fit. For the major bifurcation here, I chose the dissimilarity between Big Battles and Skirmish gaming. Notice that Warhammer40k and Sci-Fi are very different too.

The big take-aways from Dimension 2 analysis are: 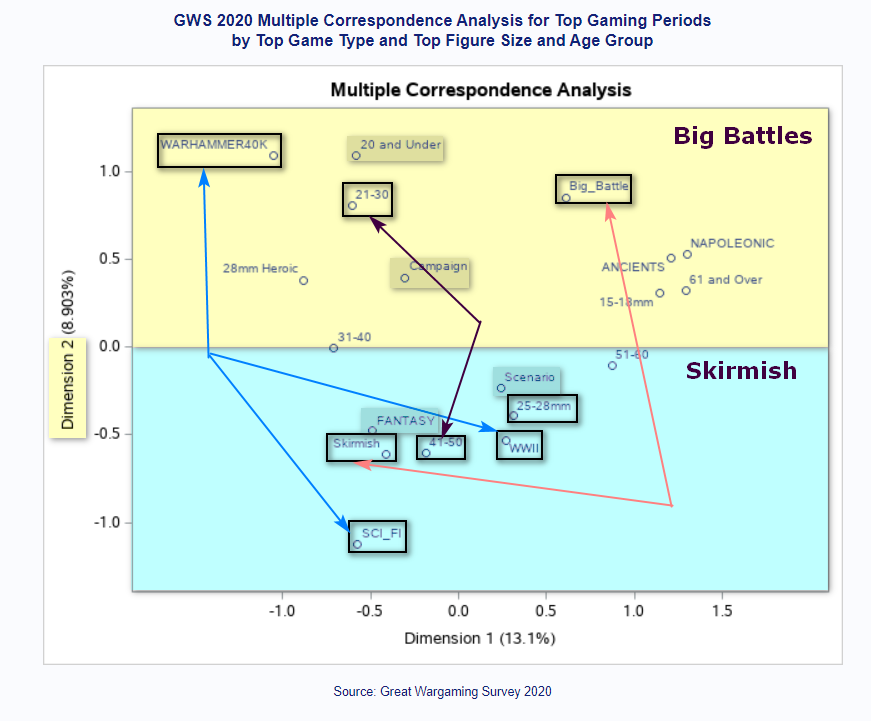 As in the prior exercise, Dimension 1 and Dimension 2 analyses are further decomposed into quadrants. The magic quadrant below shows a similar pattern to the magic quadrant in the previous analysis. Generally, the attributes present in that earlier work (without age group) remain in similar relative positions to one another. So, adding age group did not alter the relationships between game period, type, or figure size much at all. 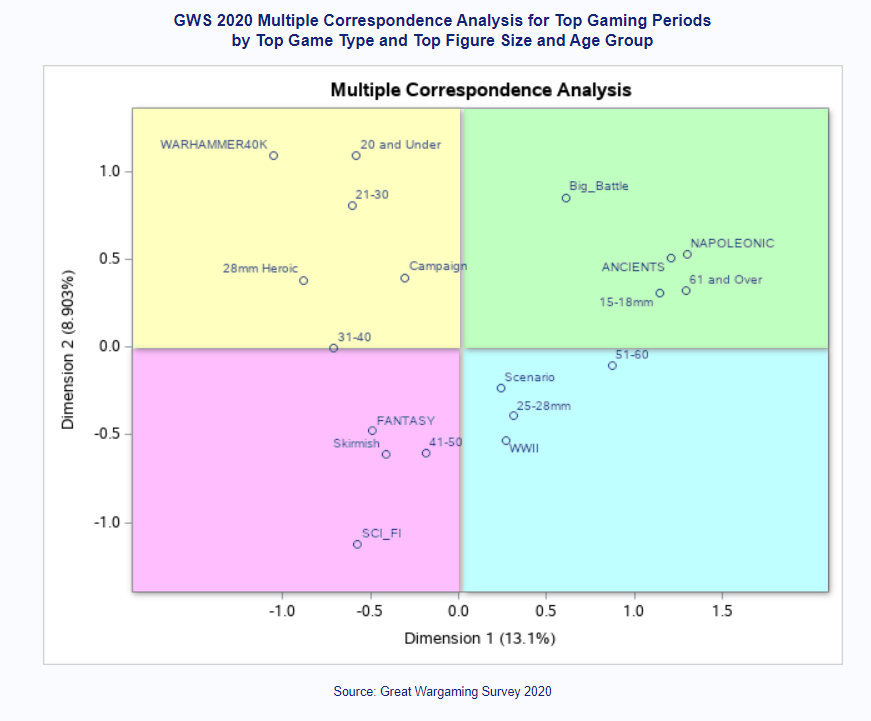 What general tendencies surface when age is added?

Adding age into the collection of attributes, while not changing the overall traits and tendencies presented in the earlier MCA analysis, provides an additional dimension into the picture of the hobby.

Do these generalizations of gamer tendencies fit into the common body of knowledge of the state of the wargaming hobby or offer new insights?

Does this analysis suggest a lifecycle approach to wargaming wherein young gamers tend to be drawn into the hobby through Warhammer40k, grow-up into Fantasy/Sci-Fi, convert to historical wargaming in their 40s, and continue this passion into old age?

Alternatively, perhaps wargamers enter into the hobby at a certain place and time, are attracted to what is popular, and then stick with that genre as long as they remain in the hobby?

Well, this is enough of this topic, for now. I, at least, have a better understanding of the relationships between game period, game type, figure size, and age group. I am firmly in the green quadrant with respect to Napoleonics, but I prefer 25-28mm for Ancients. Hopefully, this exercise has been useful to others as well.

Next time, I plan to dig into a new topic from the survey. What next? Perhaps something lighter. Please stay tuned.