The 2020 survey includes a dozen choices for figure size (or scale). The units of measure vary with most choices presented in millimeters. Some are presented as a model classification such Ships, Space, or Aircraft.

Given the first choice of gaming period for each respondent, the counts of scale and favorite period were tabulated. The chart below illustrates the cross-tabulation of Game Period by Figure Scale. 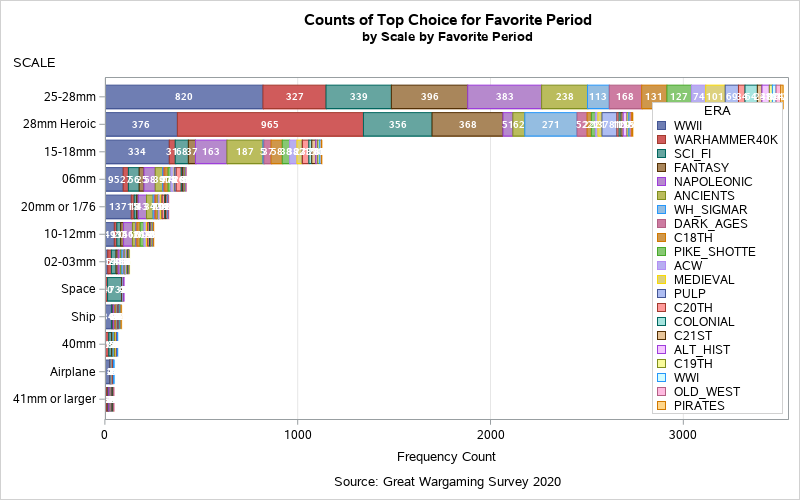 What do these tabulations show?

By now, it should be no surprise to see that 25-28mm figure size dominates the first choice. 28mm Heroic comes in a distant second. After these two figure sizes, popularity drops off precipitously with 15-18mm coming in at a very distant third.

Transposing the data by putting Era (Favorite period) on the y-axis and Scale as a stacked bar within Era, provides a different perspective. As expected, WWII takes top honors with Warhammer40k, Sci-Fi, Fantasy, Napoleonics, and Ancients making up the top five favorite periods. 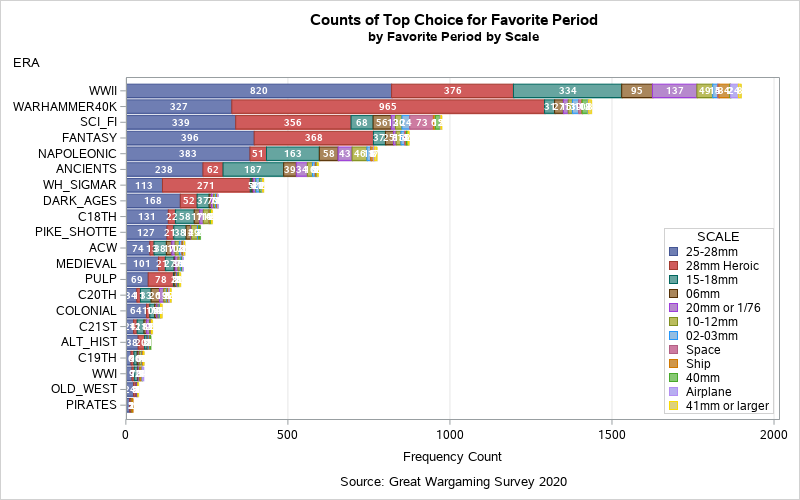 In the favorite gaming period of WWII, 25-28mm figure size dwarfs the other categories with 28mm Heroic and 15-18mm coming in at second and third places. Notice that 20mm or 1/76 takes up the fourth place. Are the older generations of wargamers, who came of age in the 1970s, continuing with 1/72 or 1/76 WWII wargaming, or is a new age cohort picking up the reins? A question for another time, I suppose.

For the second most popular period, Warhammer40k, 28mm Heroics crushes the competition. 25-28mm comes in at a very distant second. Sci-fi and Fantasy are about evenly split between 28mm Heroics and 25-28mm. Rounding out the top five gaming periods, Napoleonics and Ancients hold 25-28mm and 15-18mm as the two most popular choices in figure sizes.

Are there surprises in these results? One observation is that while 25-28mm is popular among all of the top gaming periods, 28mm Heroics is really the realm of the Fantasy/Sci-fi gamer. Any other observations of note?