The survey includes ten choices for game type ranging from games using one figure or vehicle per player up to big battle games with thousands of figures on the table. The game genre covers sports, tournament, survival, and others. Some may be more familiar to historical wargaming while other genres may be more familiar to fantasy and sci-fi wargaming. Sports, survival, and cooperative games may not lend themselves to easy classification between historical or fantasy/sci-fi.

Whatever a gamer's preferred game type among the listed choices, I found this question posed a difficult choice. Most of my miniatures' wargaming battle are historical, scenario-based, big-battle gaming. With the choices provided, what do I select as my preferred game style? For me, I faced a conundrum. Do I choose Big-Battles or Scenario-Driven as my first choice? To me, these two choices go hand-in-hand. I do not recall a Big Battle game that was not driven by a historical scenario. Given the situation that all Big Battles are scenario-driven, but not all scenarios are Big Battles, I likely picked scenario-driven as my first choice. Or, did I? Perhaps, I needed a bit more guidance when answering this question? Was I alone in facing indecision in the choices offered? (Point taken - next survey should split game size and type, JO)

Given each respondent's first choice of period (or settings), each first choice of game type is tabulated. The graphic below illustrates these aggregated results by Game Type and Game Period. 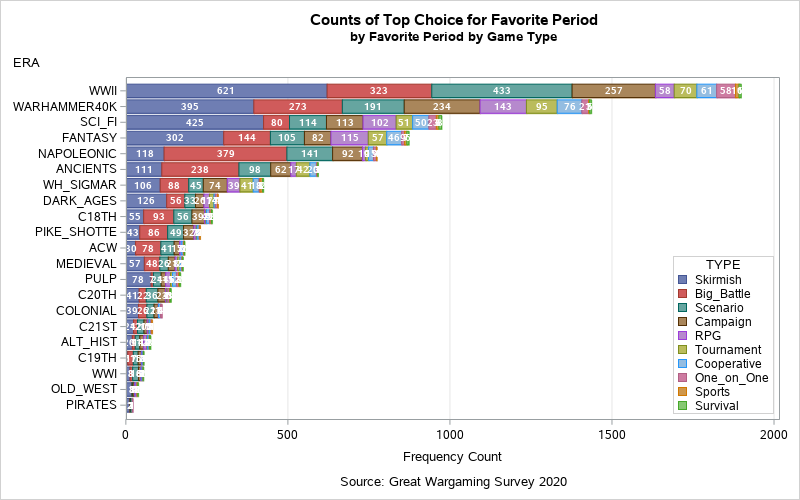 What insights can be gleaned from this exercise?

First, Skirmish, Big-Battle, Scenario-Driven, and Campaign-Driven game types comprise the top four choices when responses to all first choice periods are aggregated. Second, Skirmish gaming is the top choice by a large margin. Third, while WWII is the most frequent top choice for skirmish gaming, Warhammer 40k, Sci-Fi, and Fantasy are well represented. In addition to being the top choice for skirmish gaming, WWII represents the top game period in three of the top four game types. Only Napoleonics edges out WWII in the Big-Battle game type. Finally, sports and monster/survival gaming seem to hold little traction as a first choice. Even single-figure or one-on-one gaming shows little primary interest.

When the data are transposed, showing Favorite Period by Game Type, WWII gaming rises to the top of the charts. With the addition of the second-placed setting, Warhammer 40k, these two game settings garner much of the gaming attention. 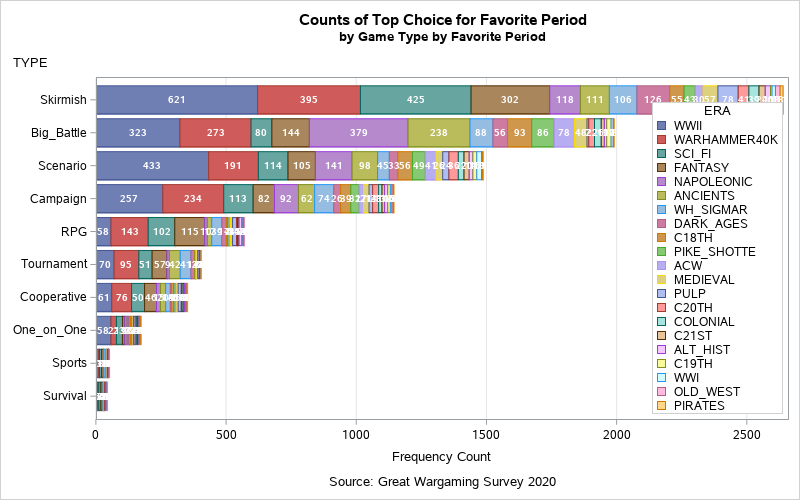 What other insights emerge from this slice of the data?

First, when reviewing the top five settings, skirmish gaming is the most popular game type with the exception of Napoleonics. As noted earlier, Napoleonics holds Big-Battle as its first choice of game type. Second, in addition to Napoleonics, Big-Battle gaming is the top choice for Ancients, 18th Century, and Pike & Shotte gaming. If WWII gaming is excluded, Big-Battle gaming seems to be the choice for historical wargaming periods. Finally, once the top six or seven settings are accounted for, primary interest in the remaining game periods falls away quickly.

For the next survey installment, I stick with analyzing game period/setting. Expect an examination of favorite game period by figure size. Anyone willing to hazard a guess, and go on the record at what those results might suggest?