Before beginning, the survey data need to be pruned back in order to make the graphical representations manageable.

First, 21 game periods are identified in the survey. For this work, the Top 6 game periods (highlighted Periods in the graphic below) will be kept for later analysis. This Top 6 includes three fantasy/sci-fi periods and three historical periods. 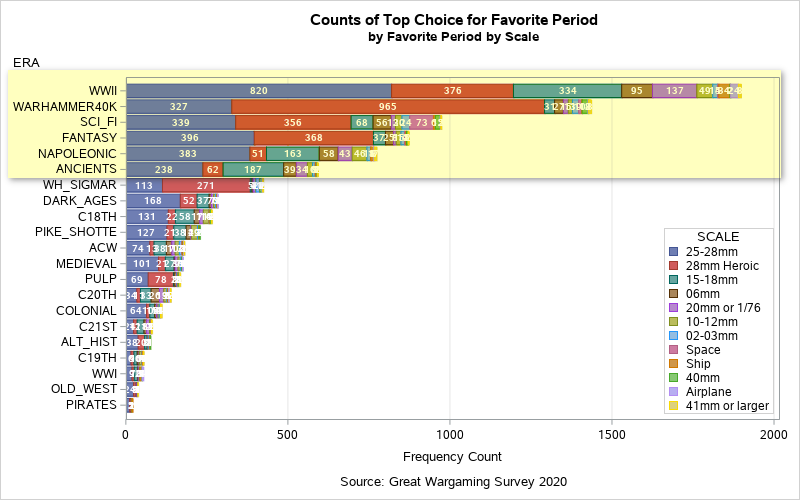 Second, ten game-types are identified in the survey. With a clear breakpoint in total counts between Campaign and RPG, only the top 4 game types (highlighted Types below) will be kept. 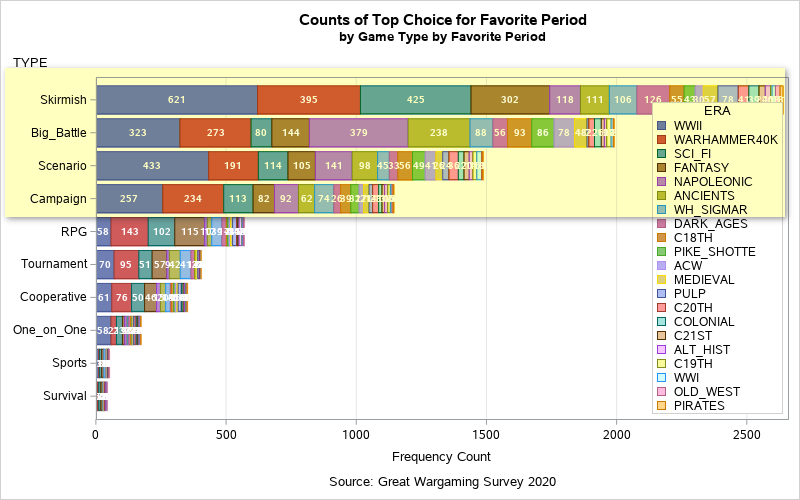 Third, the top choice of figure size drops off precipitously after 25/28mm sizes, but 15/18mm will be included as a viable third choice as counts again fall dramatically after 15/18mm. 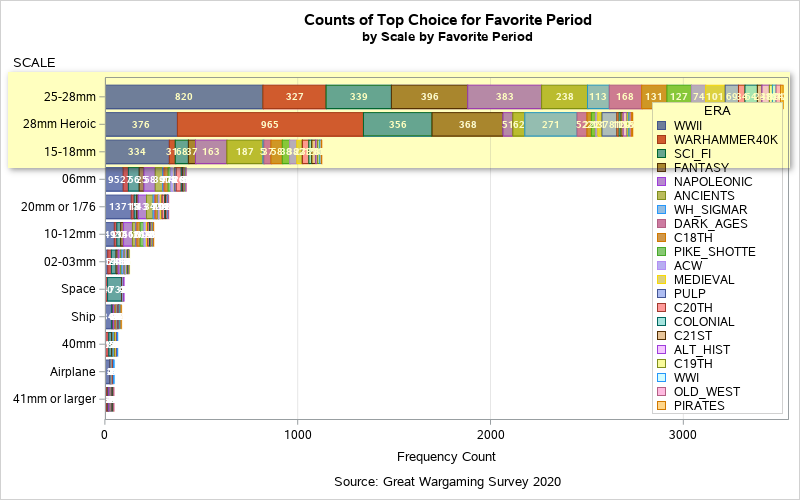 So for this study, the analysis will concentrate on the interactions between six Game Periods (WWII, Warhammer40k, Sci-Fi, Fantasy, Napoleonics, and Ancients); four Game Types (Skirmish, Big Battle, Scenario, and Campaign); and three Figure Sizes (25-28mm, 28mm Heroic, and 15-18mm).

Multiple Correspondence Analysis (MCA), briefly, is a statistical technique from which any underlying structure in the categorical response survey data may be detected. The results are then presented in graphical form in two-dimensional space. Don't throw in the towel quite yet! Interpretations are understandable and intuitive without knowing the underlying technique.

Pushing all of these data through the algorithms produces the graphic shown in Figure 1. 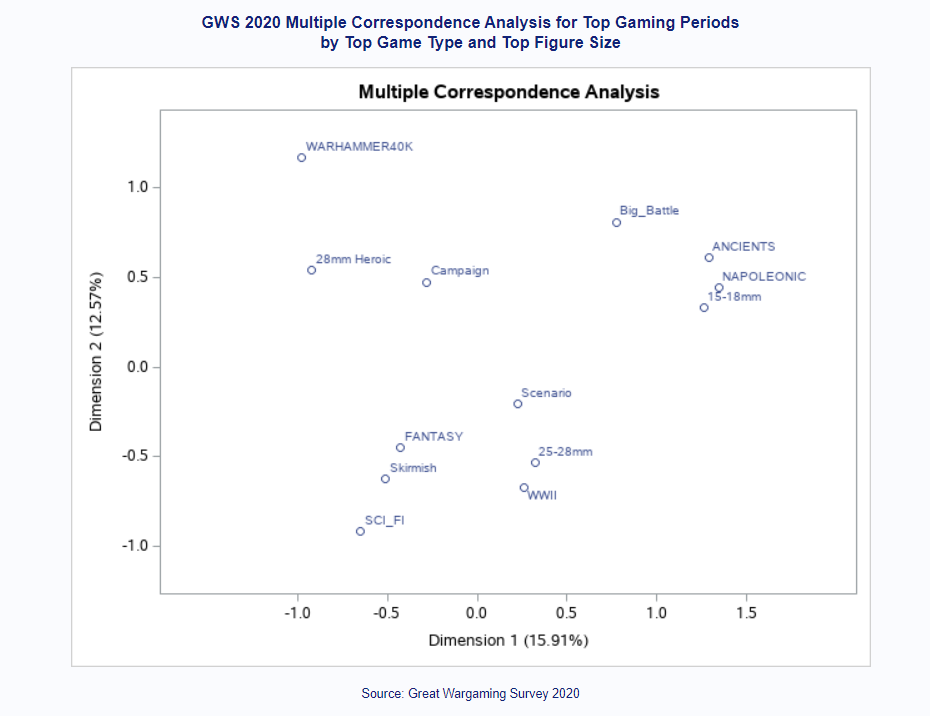 What do these scattered, labeled points suggest? Some attributes are grouping near one another (Napoleonics and 15-18mm, for example), while other attributes seem to be scattered hither and yon. Are there any useful patterns contained herein? To find out, let's tackle this question one dimension at a time.

In Dimension 1, only four of the attributes are identified as loading in this space. Those attributes are 28mm Heroics, 15-18mm, Ancients, and Napoleonics (see Figure 2). Notice two distinctions in the Dimension 1 space. Ancients, Napoleonics, and 15-18mm are grouped in close proximity in the right half of the graphic. 28mm Heroics groups by itself in the left half of the graph and far from the Ancients, Napoleonics, and 15-18mm group. These results suggest that 28mm Heroics is very dissimilar to 15-18mm and that 15-18mm gaming tends toward Ancients and Napoleonics game periods. Also, notice that non-historical game periods group on the left and historical periods on the right frame. 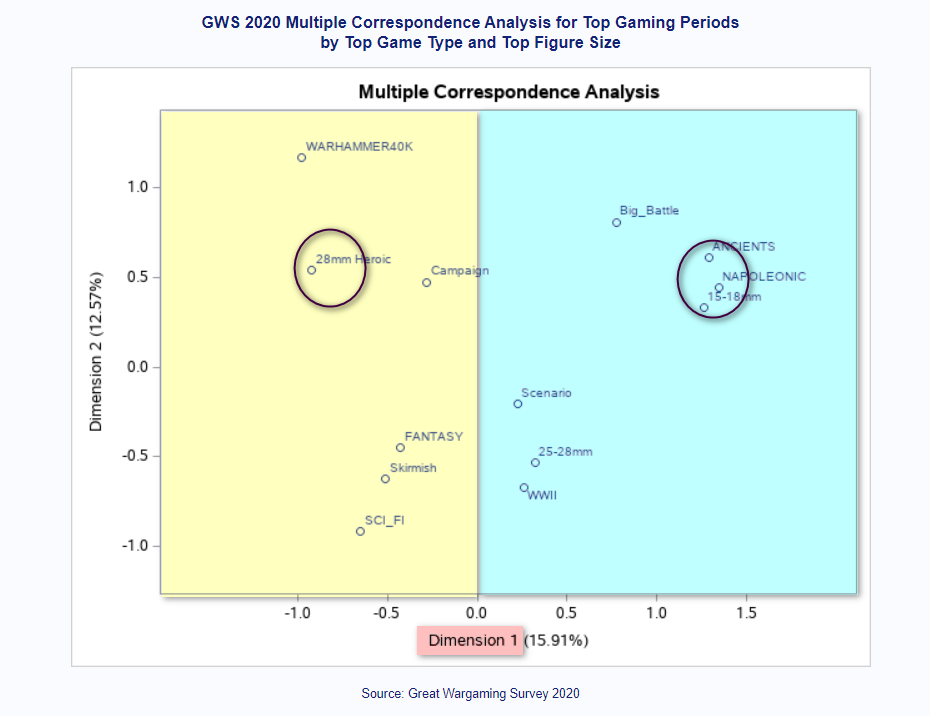 In Dimension 2, all remaining attributes are identified in this space and encircled to ease identification (see Figure 3). Notice that Warhammer40k finds itself in the top half of the graph along with Campaign and Big Battle game types. All other attributes group into the bottom half of the graph. What inferences can be made in the Dimension 2 space?

First, notice the distance between Warhammer40k in the upper half and SCI_FI in the lower half. This result suggests that respondents choosing Warhammer40k are very different from those choosing 'generic' Sci-Fi. Notice also that Warhammer40k tends toward Campaign and Big Battle gaming over Skirmish gaming. Finally, Fantasy, Sci-Fi, and WWII game periods tend toward 25-28mm figure size and Skirmish game type. 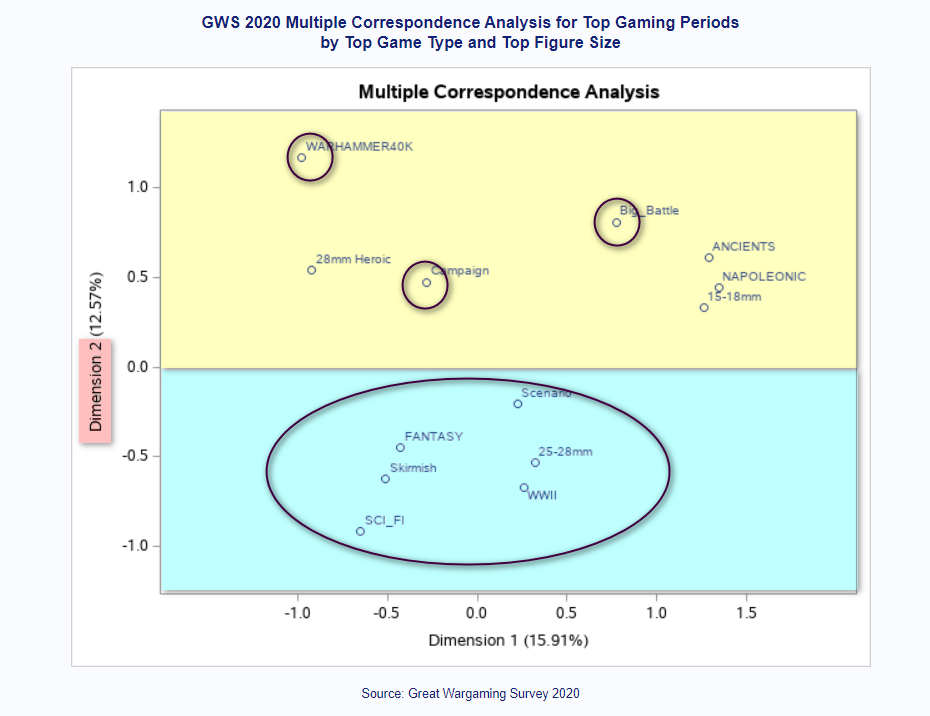 With tendencies identified in the first two dimensions, does a breakdown into quadrants make sense? Are more tendencies discoverable? See Figure 4. 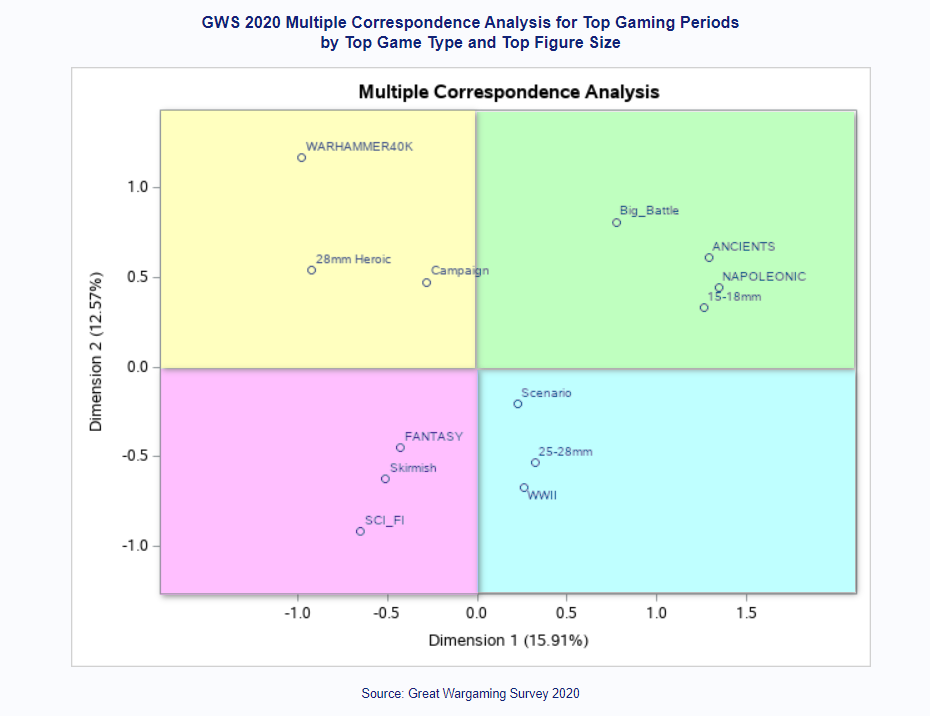 Interestingly, each of the Game Types finds itself in only one quadrant with no confounding or overlap. Campaign game type falls into the Warhammer40k and 28mm Heroic quadrant in the upper-left; Big Battle game type coincides with 15-18mm and Ancients/Napoleonics in the upper-right quadrant; Scenario game type groups into the lower right quadrant along with WWII and 25-28mm; and finally, Skirmish finds itself in the quadrant along with Fantasy/Sci-Fi. Given the distance between 25-28mm figure size in the blue quadrant and the attributes in the purple quadrant, Fantasy/Sci-Fi and Skirmish tend toward 25-28mm figure size. As for the WH40k and Campaign relationship, notice that 'Campaign' is situated near '0.0' along the Dimension 1 axis (x-axis). Being closer to the axis signifies a less strong relationship. so, I suggest the relationship between WH40k and 'Campaign', while present, is not a strong one. 'Campaign' simple tends toward WH40k with respect to the other game types.

Now, to me, the analysis is remarkable in that data from the nearly 11,000 surveys can be distilled down to produce these results and conclusions. This exercise demonstrates the possibilities of data analysis and the insights attainable given some effort.

What, in this MCA analysis, stands out of interest to the reader? Are there surprises or are these results accepted, common knowledge?

Next time, I plan to toss age group into the mix and see if any clear and insightful tendencies surface. Will age muddy the insights gained or contribute to a more meaningful interpretation of relationships between game period, game type, figure size, and age group?