GWS 2020: highlights and maybe some shadows

And we’re done. Well, we were done a few weeks ago, but despite (or because of) Covid, it’s been a bit hectic around here. Time to take a quick look at the Great Wargaming Survey 2020. 10783 wargamers took the survey and Guy has randomly selected 18 prize winners from the 8362 who left their email address. He tells me he’s already emailed the lucky winners, so you might want to double-check your inbox for an email from editor@wssmagazine.com.

The data has been thoroughly anonymized and forwarded to Jon Freitag and Miles Reidy for further analysis. I have also sent relevant sections to Dr.Robert Körner for further study.

To get us started, I’ve picked out a few questions that I can easily answer.

Captain Obvious to the rescue: we’re still a bunch of middle-aged guys (98%) from the Anglo-Saxon world (the UK, US, Canada, Ireland, Australia and New-Zealand make up nearly 78% - so that doesn't include me, but it is obviously self-selecting for English comprehension). Interestingly almost half the respondents had taken the survey before, which is a slowly rising proportion.

Most of us still began to game as a young adult, and interestingly, the proportion of new wargamers was higher this year than in recent surveys. Determination to continue the hobby is also still very high, although the percentage of doubters has grown, perhaps due to the current world upheaval. That is still a very small number though, compared to the overwhelming, almost rabid enthusiasm of the rest.

One of the new questions this year separated out the ‘arena’ of gaming (land, sea, air and space) from the setting/era. It’ll hardly be a surprise that ‘land’ was the clear winner, and was ranked first by nearly 87% of respondents. On average, ‘sea’ beat ‘space’ by a nose-length, though the numbers for all three are far smaller.

Another newcomer this year is the question of material. Do you like your minis in plastic, metal or any of a range of choices. You can see the winner in the graph here. It’s plastic, interestingly enough, despite its lack of 'heft'. 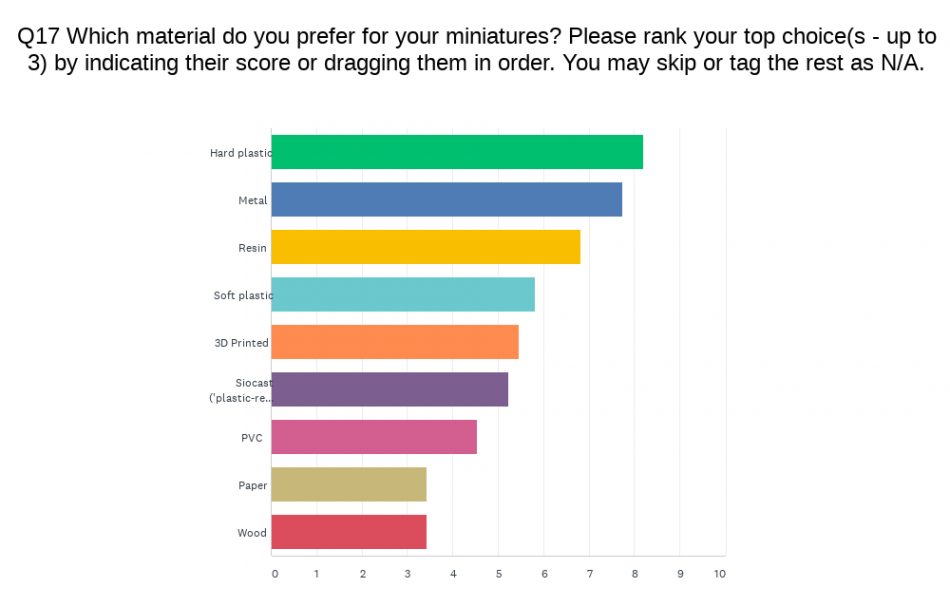 New again was the question about the number of painted figures in everyone’s collection. I found it surprising to see that most wargamers have fairly modest numbers of painted troops, especially considering how long most respondents have been in the hobby. Perhaps the rest is sold off? That said, in second place are those with the largest collections of over 2500 figures!

Even in these socially-distanced times, friends are the most important inspiration. Perhaps the lack of direct contact has guided us to social media and video chats where exchanging ideas and photos is even easier?

Finally, Covid really has had a fairly modest impact. But all of this begs more analysis, thought and material to talk about. If you have any questions that can be answered with the data from the GWS, please don't hesitate to post them below!

Oh, the shadow? Well, there is definitely still that age bubble moving through 'the scene'.