In a recent Wargames, Soldiers & Strategy podcast (see WSS43 with survey discussion beginning at 14-minute mark), the group discussed results from the recently completed Great Wargaming Survey 2020. Jasper began providing a dramatic rundown of the Top 5 gaming periods or eras beginning with Number 5 and working his way to the top placing.

The question under discussion was: Q12 Which periods or settings do you prefer? Please rank your top choices (up to 5) by indicating their score or dragging them in order.

The summary of top periods in the same reverse order as presented in the podcast is:

Sci-Fi came in as the favorite gaming period with WWII way down in fourth place. This ordering of top gaming eras is unlike the popularity witnessed in earlier years. Typically, WWII tended to come out as the favorite gaming era. Have preferences changed so much in one year's time? The podcast panel was surprised at the results and offered suggestions as to why this result is believable. Still, there was some skepticism with the results. I was asked to investigate.

There is one important note to make with respect to the 2020 responses to this question. The method in which this question was presented in 2020 differed from prior years. Rather than allow a respondent to rank interest for every gaming period on a 1-5 scale, (a respondent could have multiple 1's, 2's etc..), the 2020 survey asked respondents to rank their top five periods in rank order. Only one #1 rank, one #2 rank, and so on. While the question requested that the responses be limited to the top five only, respondents could rank 21 periods if they so chose. Many did!

The survey-software uses a weighted 'score' to compute these rankings. These scores use all ranked responses and are not constrained to the top five choices. Since ranking more than a handful of periods may be subject to error or simply result in filling in the lower-ranked responses randomly, I limit my data exploration to the Top 5 responses as requested from the survey. Will restricting this analysis to the top five ranked gaming periods change the survey results? After this question is addressed, I dig into the numbers from several different perspectives.

Top 5 Re-examined
First, aggregating the responses across the top five ranked periods for each respondent yields the following ranked order.

While the Top 5 periods all remain the same as the survey-scoring announced in the podcast, the ordering is different. WWII pops up from #4 to #1 and back to its traditional top placement. Notice, in the graphic below, that Ancients only barely beat out Napoleonics for a top-five placing. One of my favorite periods (mid-19th Century European Wars) finds itself in the last place in the aggregated top five rankings with difficulty even registering a significant signal. Such colorful uniforms with such little interest. Sigh... 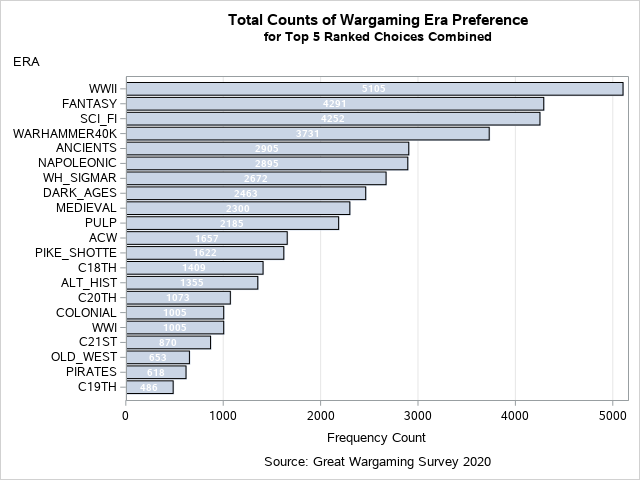 What about considering the top eras by ranking? That's for tomorrow!