December 2021
A funny thing happened along my intended path to follow up the collection size analysis (see: I’ve Got more Painted Miniatures Than You). The study began by aggregating the survey data on figure size (I may use the term 'scale' interchangeably with 'figure size'). The next step involved plotting the two-way interactions between figure size, collection size, age group, and primary interest. At that point, I changed tack. To better understand the relationship between collection size and figure size, more study on figure size was needed.

Figure Size in the 2021 Survey

The 2021 survey saw a change in the way in which the question on figure size was asked. In the 2020 survey, respondents were asked to rank their preferred figure sizes in rank order. Well, this proved not so easy to do. After feedback and reflection, the 2021 survey changed the response to one of choosing the top three with no specific order ranking. While the 2021 survey can no longer distinguish a respondent's top figure size, the top three choices can be aggregated to form a view of each respondent's interests. This change made the question much easier to answer. After aggregating the top three figure size choices for each respondent, what emerges? Note that the maximum number of selections was three, but many participants selected only two or even only a single top choice. Figure 1 shows the counts of the top three choices for all respondents. 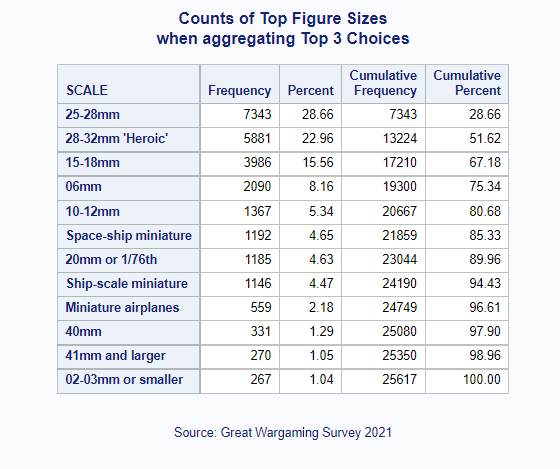 From Figure 1, the three figure-sizes of 25-28mm, 28-32mm Heroic, and 15-18mm claim 67% of survey respondents' top three choices. 6mm comes in a distant fourth. After those four, the popularity of the remaining categories falls away quickly. As an example, the 2-3mm or smaller category only saw 1% of respondents having this scale in the top three. As a check, I returned to a similar summary for the 2020 survey in which the top choice was identified. The comparison between the 2020 and 2021 summaries produced the same results. That is, the rankings of the top three choices were the same in both 2020 and 2021 regardless of method. 6mm came into the ranking in fourth place in both as well. Reassuring result!

When the relationship between figure size and age group is examined, are any tendencies present or generalizations to be made? See Figure 2. 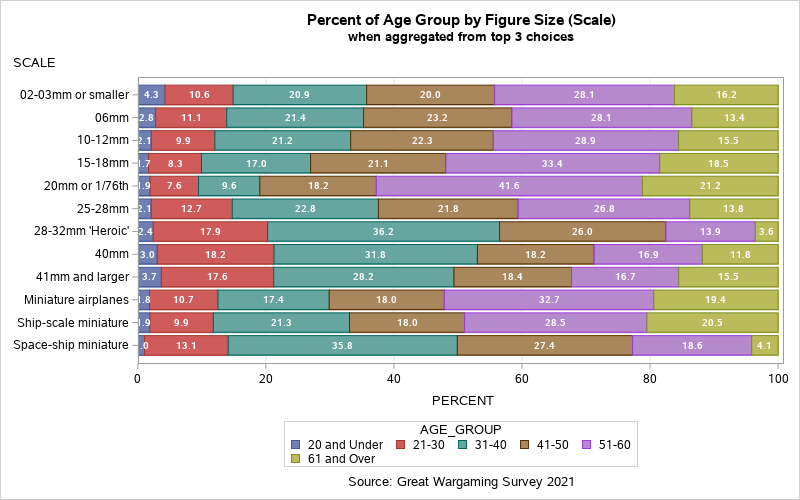 Turning attention to figure size and primary interest, what does Figure 3 suggest? 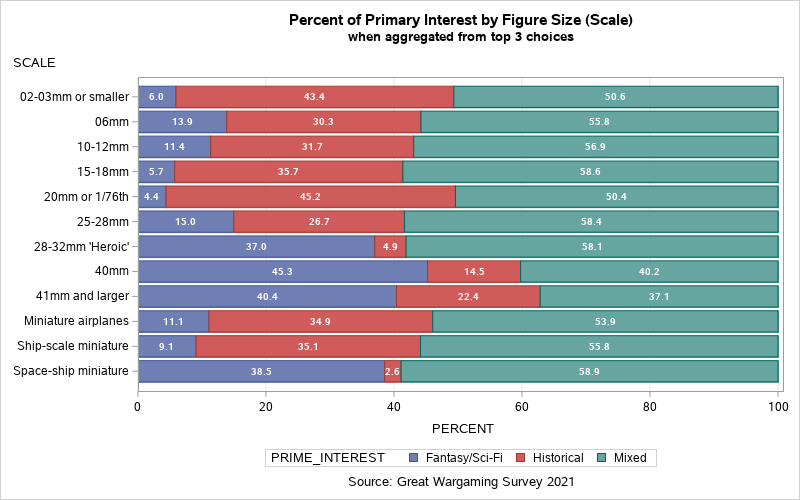 For one, Figure 3 suggests that roughly half of all respondents are happy playing both sides of the net in "Mixed" company. As in Figure 2, scale is split convincingly between historical and fantasy/sci-fi wargamers. Historical wargamers tend to prefer the smaller scales while fantasy/sci-fi wargamers opt for the larger figures. Notice that historical gamers are no fans of 28-32mm Heroics. Fantasy/sci-fi gamers are not drawn to 2-3mm, 15-18mm, and 20mm figures but dabble in 6mm and 10-12mm figures.

Finally, when comparing the relationship between figure size and collection size, what are the tendencies, if any? Figure 4 illustrates these relationships. 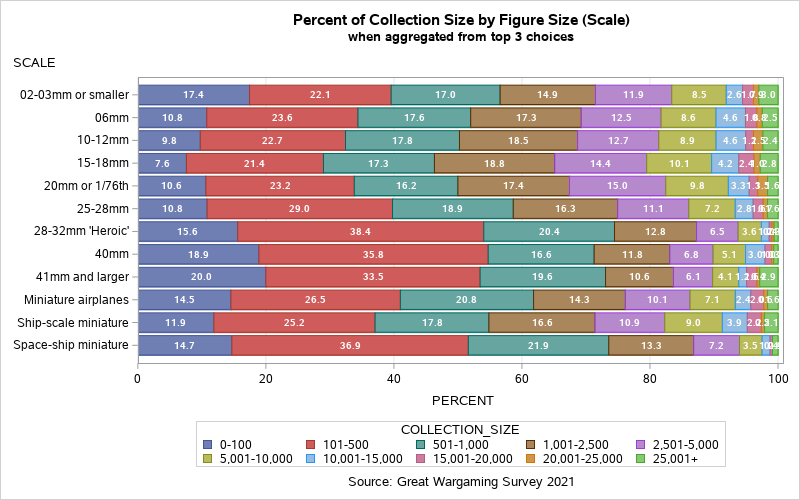 Broadly speaking, we see that there is an inverse relationship between the size of the figure and collection size. On average, this response group suggests smaller figure size leads to larger collections and larger figures (28-32mm Heroic and larger) lead to smaller sized collections. For respondents with a preference for larger figures, almost half of the respondents hold collections of 500 figures or less. For those collecting smaller scale figures, roughly 20% have collections exceeding 5,000 figures. Nature abhors a vacuum. If budget, gaming table size, and storage constraints remain fixed then do collections expand to consume those scarce resources? That is, does collecting smaller figures lead naturally to larger collections? Certainly, other factors could be at play. Does gaming style (skirmish, Big Battle, etc.) drive the final collection size? Of course, there are other exceptions and situations that may drive collection size. When examining these charts and reflecting upon your own wargaming tendencies with respect to scale, age, interest, and collection size, do the results of the masses capture your own habits and patterns? How do these aggregated survey results differ from your own?