The stuff of Legends

Sometimes one reads something that doesn´t depart from the mind in any particular hurry. Such was the case for me with regard to the online blog ´Squeaky Carcass`, presented by the editor of this magazine in the run up to the issue concerning the Albigensian Crusade.

In the blog Dirk van Gorp employs contagious enthusiasm to expound on the particular bond he felt with the main theme based on a childhood encounter with the siege of Carcassonne in a Suske en Wiske comic book. He also explains how this interest, once awoken, was later reinforced by the novel Labyrinth by Kate Moss, as well as admitting that this particular topic consistently defeats his efforts to maintain professional historical objectivity simply because it is close to his heart.

There was much recognition, though it took a while for me to define just what struck such a chord. There was a bit of childhood nostalgia, as I used to read the same comics and Dirk did a great job in evoking the distinctive oddities of the series. It also indirectly addresses the topic of subjective versus objective interpretation, a theme I usually relish.

However, what really struck me was how the simple act of reading a comic could lead to a lifelong attachment to a particular topic and how something similar probably sparked fascination with history in the first place. This too was recognizable; for me the spark had been formed by Tonke Dragt’s children’s book Letter for the King. Like Dirk wrote “it had most of what a young man like me was looking for: knights, swords, castles, not-too-scary-and-human enemies….” Then it occurred to me that it was highly likely that most readers of Medieval Warfare magazine probably had similar childhood experiences; whether the spark was a comic, a book, a television program, a visit to a castle, a local legend or the tales of a particularly good history teacher. It had to start somewhere, after all. And does that not mean there is still a little bit of that little boy or girl in us, reluctant to release some of our favourite childhood visualizations of ‘history’?

I have started many an article with clumsy but sincere praise for this magazine and its readers. These words, however, were always the first victims of rigorous word count reduction. In this blog I can let the words stand: I like this magazine a great deal. I admire it’s doggedness in pursuing historical themes that go beyond superficial generalization. It would be so easy to pick the household names, historical brands almost, and fill most of the pages with pictures and glossy vague half-truths. Instead themes are chosen and analyzed from different perspectives, not exhausted obviously, but certainly explored at length and in-depth. It stands to reason then that I also admire the readers, for they don’t shy away from trying to comprehend the complex context, making a real effort to gain a thorough understanding of the theme that is on offer, rather than resorting to easily digestible fancies. To use a comparison, they don’t mind accepting that long-distance logistics was far more important to the outcome of a particular campaign than the set-piece battle, even though that little inner kid secretly longs for the knights, swords, castles and the not-too-scary-and-human enemies, hoping that the mind’s eye catches a glimpse of that glorious cavalry charge, horns a-blowing, banners streaming through the air and armour shining in the sun like the divine retribution of an angel.

It isn’t necessary to worry overmuch about these occasional flights of fancy; in actual fact, something as simple as a comic book can actually grant you a better understanding of history. English historian R.G. Collingwood put forth the notion of ‘historical imagination’; essentially he argued that the study of history is a product of the imagination. For example, if we take the setting of the Rubicon, the date of 49 BC and the presence of a Roman General, we have a reasonably reliable historical ‘fact’, the from-the-outside-observable aspect of history. However, the picture is not yet complete, even quite meaningless. ‘So, there was a Roman fellow at a river a long time ago, whooptie doo’, might be a schoolboy’s response. According to Collingwood’s theory, history can only take on a completed form by the addition of the ‘inside’, the thoughts and motivations of key players, and that is something we can only achieve by using our imagination. This is not fictional; after all, we are bound by the march of time. But as we enter the process of what Collingwood called ‘re-enactment’, we try and place ourselves in Caesar’s sandals: ask what sense of historical destiny did he experience, knowing that the Rubicon was a point of no return? This is where it gets complex, as we now enter what Collingwood called a ‘web of imaginative construction’. To fully appreciate Caesar’s “Alea iacta est”, we need to do several things. One is to cast a wider net and include, for example, the response in Rome, even though that response is not physically present at the crossing of the Rubicon and had not yet taken place. We also need to be critical about the documentation, remembering that much that was recorded about this event is flavoured by strong emotional responses. Then there is the interpolation where we fill in the missing gaps, and there we have to rely solely on the historical imagination, a process in which we visualize past events of which we actually have no knowledge at all. In order to do that our mind draws on all of its resources, including the serious knowledge of broader historical context but also those flights of fancies, the power held by a Roman Emperor as conveyed in the movie Gladiator and perhaps Caesar’s impetuousness which we recall from Asterix comics. 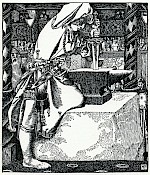 The historical imagination sparked in a childhood brain imparts a healthy appetite for more. This is where our cultural legends step in (unless those caused the spark in the first place!). For me that was King Arthur. Since that first encounter I have digested much information on the actual historical context and can (sort of) place Arthur as a Celtic-Romano warlord and the stories around his sword Excalibur as part of Celtic mythology. None-the-less, my mind still insists on the wee lad drawing a sword from a stone under the supervision of the wizard Merlin. In my mind historical fact and fancy co-exist quite happily, when required I can separate them just as I then mix them again to suit my occasional need for semi-mythical visualization.

Where is all this leading up to? Well, I am delighted that the upcoming issue of Medieval Warfare, III.6 (published around the beginning of December 2013), is, in a sense, rewarding the reader for his or her efforts in appreciating a serious approach to history and also encouraging the reader to explore his or her own historical imagination by revisiting some of those childhood heroes of old. Naturally, the presentation of such legendary topics as Andreas Baumkircher, Prester John, Flavius Theodericus, the Grunwald Swords, Roland, Willikin of the Weald and Arthur will have the serious in-depth approach which you have come to expect from us. By all means peruse the pages of the issue in order to grasp the complexities and understand the subtleties as you are wont to do. However, this time also envisage those legendary giants of old striding across the pages once more and most of all: Enjoy.

Sometimes one reads something that doesn´t depart from the mind in any particular hurry. Such was the case for me with regard to  the online blog ´Squeaky Carcass`, presented by the editor of this magazine in the run up to the issue concerning the Albigensian Crusade.