Chronologically speaking, Perseus is one of the earliest Greek heroes. If you have a look at the family tree in the first blog post in this series on the hero, you will see that Perseus is Heracles’ great grandfather, and Heracles was able to join Jason as one of the Argonauts and met Priam, who ruled Troy as an old man in the Iliad, when the latter was still a child.

If you look at the family tree, you’ll see that Perseus’ grandfather is Acrisius, and he had a (twin) brother called Proetus. One story is that Acrisius and Proetus quarrelled continuously; they were even said to already fight while still in their mother’s womb! They also disagreed over who would argue the Argolid and, to make a long story short, after a brief war it was decided that Acrisius would rule Argos while Proetus was given the city of Tiryns.

Proetus was thus a contemporary to Acrisius and a great-uncle of Perseus. His son Megapenthes would swap Tiryns for Argos after Perseus had accidentally killed Acrisius. But Proetus himself is also involved in the story of another early hero, who is connected to the tale of Perseus in other ways, too: Bellerophon.

The basic outline of Bellerophon’s story is told by Glaucus in the Iliad (6.152–203). Bellerophon was a grandson of Sisyphus, who ruled Corinth. He had been exiled after having committed a murder and ended up at the court of Proetus. Proetus’ wife fell in love with him, but Bellerophon refused her advances. Spurned, she went to her husband and told him that Bellerophon had tried to rape her.

The laws of hospitality meant that Proetus couldn’t simply have Bellerophon killed, so he sent him to King Iobates in Lycia with a letter (a sealed wax tablet). Once there, Iobates entertained Bellerophon for a few days before asking what business he had in Lycia. Bellerophon gave him the letter which ordered that the bearer of the message should be put to death.

But Iobates now faced the same conundrum as Proetus: he couldn’t just kill a guest or he would suffer the wrath of Zeus himself. Instead, he proposed that Bellerophon rid him of a number of problems that plagues his country. The most famous of these tasks was the slaying of the monster Chimera.

Chimera was a fire-breathing lion with the head of a goat springing from her back and her tail was a living serpent whose fangs dripped venom. The most famous depiction of Chimera is no doubt the Etruscan statue from Arezzo, which originally had inlaid eyes and teeth and was part of a larger group that must have included Bellerophon himself. Here’s a picture of the statue, taken from Wikimedia Commons: 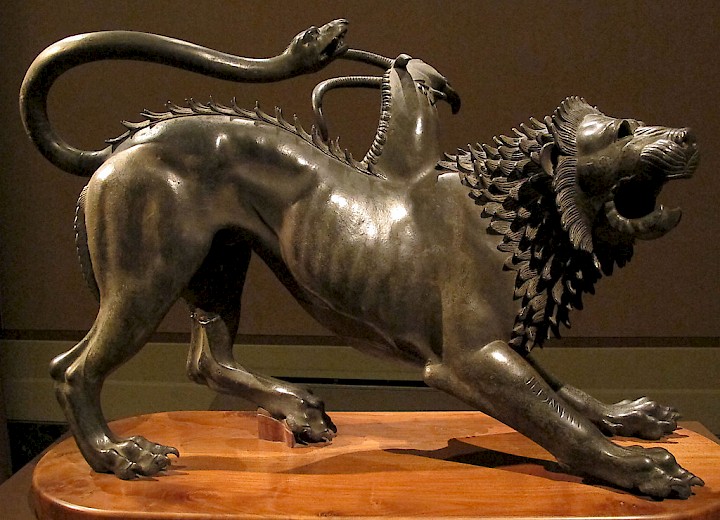 Now, according to the story, Bellerophon was given a bridle to tame the winged horse Pegasus, with which he would be able to slay the fearsome Chimera. If you recall the story of Perseus, you’ll know that Pegasus emerged from the neck of Medusa after Perseus beheaded her, which means that his story takes place after Perseus’ adventures.

With Pegasus, Bellerophon was able to defeat Chimera; vase-paintings show that this story was already well known by the early seventh century BC. Since he had survived all obstacles, Iobates decided to come clean and tell Bellerophon why he had sent him on such dangerous quests. Bellerophon was given half the kingdom and Iobates’ daughter’s hand in marriage, but he also wanted revenge on Iobates’ wife.

Bellerophon flew with Pegasus to Tiryns and told Proetus’ wife that he loved her and to climb on the creature’s back. She did so. Once they were over the sea, Bellerophon told her to lean over at which point he either pushed her off or caused her to slide off Pegasus’ back. She plummeted into the sea and drowned.

Bellerophon probably lived for some time in Lycia, where he fathered a number of children. Eventually, though, he decided to fly with Pegasus up Mount Olympus to see how the gods lived. Zeus didn’t like this display of hubris and sent an insect to sting the horse as he and Bellerophon flew up the mountainside. Pegasus reared in mid-air and Bellerophon fell off. The hero spent the remainder of his life as a broken man, while Pegasus was allowed to reach the summit and live among the Olympian deities.

Like Perseus, Bellerophon made a name as a monster-slayer and the two stories became conflated already in the course of the Classical period. Perseus was a more popular hero and so he eventually came to be associated with Pegasus, probably mounting the creature to escape from the island of the gorgons.